24 October 2012
Protecting human rights during times of conflict is one of the greatest challenges that the international community faces today as evidenced by the crises in Syria, Mali and other parts of the world, a senior United Nations official said today.

“The protracted violence is an immediate reminder that the prevention of conflict and the protection of human rights in times of conflict remain among the most daunting challenges for the international community,” the UN High Commissioner for Human Rights, Navi Pillay, told the General Assembly in New York.

“Outright disrespect for international human rights and humanitarian law, let alone for human life, is an anachronism which cannot be tolerated. The UN must act to uphold the rule of law and protect human rights,” she added during her annual report on the work of the Office of the UN High Commissioner for Human Rights (OHCHR).

In particular, Ms. Pillay urged States to take urgent and effective measures to protect the Syrian people. More than 20,000 people, mostly civilians, have died in Syria since the uprising against the regime of President Bashar al-Assad began some 20 months ago. A further 2.5 million people urgently need humanitarian aid, and more than 340,000 have crossed the border to neighbouring countries, according to UN estimates.

“There is no doubt that every Security Council member wishes to see an end to the ever-deepening conflict in Syria and to the violence affecting civilians,” Ms. Pillay said. “While taking into account important political concerns, it is urgent to find ways to avert the massive loss of civilians and human rights violations.”

During her presentation, Ms. Pillay underscored that the challenge of addressing crises and protecting human rights has grown due to organized crime, terrorism, the proliferation of weapons and the exploitation of natural resources – all developing at a faster pace.

While she acknowledged that much remains to be done to ensure human rights are respected all over the world, Ms. Pillay also noted there have been developments that indicate an enhanced attention to human rights in various countries. For example, OHCHR now has a field presence in 57 countries, and human rights advisers are working with governments to mainstream human rights. OHCHR has also expanded its technical cooperation considerably.

In addition, OHCHR has consistently supported the Geneva-based Human Rights Council, which has, over the past two years, steadily addressed urgent situations and mandated commissions of inquiry and fact-finding missions to places where there have been reports of human rights violations, including Syria.

The UN human rights chief also highlighted the work of her office with respect to development, the rule of law, democracy, and against all forms of discrimination.

“The growing recognition of the centrality of human rights in the peace, security, development and humanitarian agendas, and trust in OHCHR is very rewarding,” Ms. Pillay noted. However, she warned that financial constraints are limiting the resources required to support her office’s mandated activities.

“While we continue to endeavour to fulfil such work, without sufficient resources, we are being compelled to do less with less,” the UN official said, and called on the General Assembly to renew its commitment to support OHCHR and maintain its momentum to promote and protect human rights all over the world. 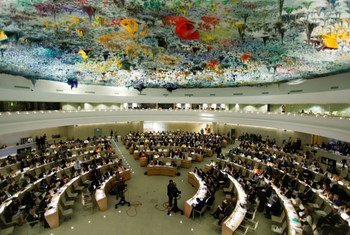 28 September 2012
The United Nations Human Rights Council today voted to extend the mandate of the independent panel probing abuses in Syria, and called on all parties to put an end to all forms of violence.