UNAMA/Fraidoon Poya
Afghan child being vaccinated against polio in Herat City on 15 October 2012.

24 October 2012
The United Nations health agency today called for renewed efforts to boost the campaign against polio, stressing that its eradication is technically feasible but political will is necessary to realize this goal.

The United Nations health agency today called for renewed efforts to boost the campaign against polio, stressing that its eradication is technically feasible but political will is necessary to realize this goal.

“We have all the necessary tools to eradicate this disease, so now there is the question of political and societal will to make sure that the emergency plans are fully implemented and that they are fully financed,” said the spokesperson for the World Health Organization (WHO) Global Polio Eradication Initiative, Oliver Rosenbauer, on the occasion of World Polio Day – the first since India was removed from WHO’s list of countries with active transmission of wild poliovirus.

World Polio Day is observed annually on 24 October, which marks the birth of United States virologist, Jonas Salk, who was the leader of the team that invented a polio vaccine in 1955.

Polio is a highly infectious disease caused by a virus that invades the nervous system and can cause total paralysis in a matter of hours. The virus enters the body through the mouth and multiplies in the intestine.

Initial symptoms are fever, fatigue, headache, vomiting, and stiffness in the neck and pain in the limbs. One in 200 infections leads to irreversible paralysis and among those paralyzed, five to 10 per cent die when their breathing muscles become immobilized.

Since 1988, the number of polio cases has been reduced by more than 99 per cent. Currently, only three countries – Nigeria, Afghanistan and Pakistan – are polio endemic. WHO is supporting these countries to implement national emergency action plans to increase polio vaccination coverage among children under five years of age.

“We have seen time and time again that this is a virus which spreads to polio free areas and causes devastating outbreaks,” Mr. Rosenbauer said. “If we don’t finish the job now we could see within the next decade 200,000 new cases every single year all over the world. Given that we are under two hundred cases now we consider this a true humanitarian catastrophe that has to be averted at all costs.”

According to WHO, more than 4,000 people have been deployed to assist the three endemic countries, supporting vaccination campaigns through the Global Polio Eradication Initiative.

In Nigeria, traditional leaders are taking part in selection of vaccinators; in Afghanistan, permanent vaccination teams operate in insecure parts to ensure children are vaccinated regardless of who controls the area; and, in Pakistan, every district is being made accountable for reaching every childe in the area with a vaccine.

In addition, a single focal point – known as a polio ‘tsar’– reports on the country’s progress to the head of State in all three countries.

In a statement, the Executive Director of the UN Children’s Fund (UNICEF), Anthony Lake, said World Polio Day is both a reason to celebrate the recent progress as well as a reminder that there is still work to be done to eliminate the disease once and for all.

“There is much to celebrate. Fewer children than ever before suffer the debilitating effects of this cruel disease,” he said. “We can see before us the finish line: the eradication of polio. But World Polio Day is also a sobering reminder that, as in many long distance races, the last mile is the hardest one.”

Mr. Lake added that the world must concentrate its efforts in reaching children that are most at risk: children with disabilities, living in extreme poverty and in conflict zones in remote areas.

“We have come so far together in the fight to end polio. We have the means to finish the job,” he said. “We can make history. Or we can fail to seize the moment. Lest history judge us harshly, let a polio-free world be our legacy to the next generation of children.” 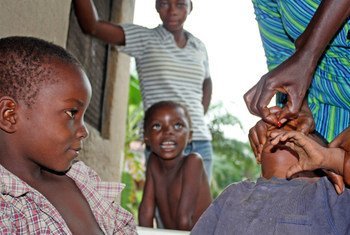 27 September 2012
World leaders, donors and experts today hailed a “once-in-a-generation” opportunity to eradicate polio, as they gathered at the United Nations to celebrate efforts that have already reduced the incidence of the crippling and potentially fatal disease by 99 per cent around the globe.