Secretary-General Ban Ki-moon today congratulated the 12 young artists who won the United Nations Art for Peace contest, which asked participants to depict their vision of a world free of nuclear weapons.

The Art for Peace Contest is sponsored by the UN Office for Disarmament Affairs (ODA) and the Harmony for Peace Foundation, and was open to youth from around the world aged between five and 17 years. Contestants were able to draw, paint, sketch, use pens, pencils, crayons, charcoal, oil, acrylic paint or watercolour for their artwork.

More than 6,600 young people from 92 countries took part in the contest, which was administered online and judged by a panel of 140 jurors, mainly art and education specialists, who evaluated each work of art based on it creativity, composition, theme and technique. The judges then selected four top winners from three age groups: ages 5-8, ages 9-12, and ages 13-17.

“On the very first day the contest website opened for business, it received just one entry, from a five year-old boy here in New York City. The next day saw an entry from a seven year-old girl in Ankara, Turkey,” said the UN High Representative for Disarmament Affairs, Angela Kane, at the opening of the award ceremony.

“Pretty soon, what began as a trickle became a flood,” she added. “During the short period of time in which the contest ran, there were over 6,600 entries from children and teens in 92 countries.”

Seventeen year-old Haruka Shoji from the United States won first-place in her age group for her painting entitled ‘Someday,’ depicting a young woman looking into the distance to a better future.

Mr. Ban said he would present Ms. Shoji’s painting to the Permanent Mission of Japan to the United Nations.

“I know they will treasure it,” the UN chief said. “I hope that leaders around the world hear this message. I hope they stop to consider what young people have told us through this contest.”

The top four winners in the 13-17 age group will receive cash prizes that were doubled from the original amounts due to a contribution of matching funds from the media platform South-South News, according to a news release.

Ms. Shoji will receive $1,000 for her painting, while Japanese artist Ai Yamanaka will be awarded $600 for ‘Nature,’ Sutatip Maijan from Thailand will receive $400 for ‘Defense Cooperation,’ and Itzel Azalia Joya Figeroa from El Salvador will be given $200 for her work, ‘Feeding Peace.’

From the 9-12-year-old age category, the top prizes went to Malaysian artist Mok Yan Ling, Michelle Minzhi Li of the United States, Karina Pershina from Kazakhstan and Germany’s Annika Tiedemann, while the top four winners from the 5-8 years of age group are Galuh Edelweiss from Indonesia, Zhihan Lu of China, Eugene Ugolnikov from Russia, and Areen Hamad of Pakistan. Each of the winning artists will receive art supplies donated by the Harmony for Peace Foundation.

All winning artwork will also be reproduced in a United Nations calendar for the 12 artists to keep as a lasting memory of their efforts. 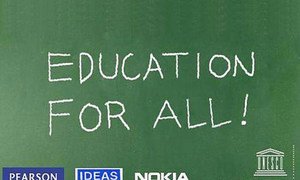