OCHA
People wade through the flood waters in the district Jaffarabad and Nasirabad, Balochistan.
23 October 2012

The United Nations will allocate close to $10 million to provide aid for more than one million people living in the areas of Pakistan that were most affected by the monsoonal flooding this year, according to the world body’s humanitarian arm.

“We must not allow the floods crisis to become a forgotten emergency,” the Humanitarian Coordinator in Pakistan, Timo Pakkala, added in a news release on the allocation of $9.9 million from the UN Central Emergency Response Fund (CERF).

“The flood-affected populations are among the poorest and most vulnerable in Pakistan,” the UN official added. “More must be done to meet people’s immediate humanitarian needs to help them recover and reduce vulnerability to similar calamities in the future.”

Launched in 2006 and managed by the UN Office for the Coordination of Humanitarian Affairs (OCHA), CERF enables the fast delivery of life-saving assistance to people affected by natural disasters and other crises worldwide. It is funded by voluntary contributions from Member States, non-governmental organizations, regional governments, the private sector and individual donors.

Flooding this year in southern Pakistan has affected almost five million people, according to Pakistani Government estimates, and many are still recovering from Pakistan’s floods of 2010 and 2011.

Mr. Pakkala said that the Government of Pakistan, the UN and its partners had distributed thousands of food packages, shelters, water and medicines, yet people’s lives remained in jeopardy in flood-affected areas.

In support of the Government-led flood relief and recovery efforts, UN agencies and humanitarian partners will use the new funds to initially reach people in flood-affected communities in the seven hardest-hit districts of Balochistan, Punjab and Sindh provinces, according to the news release.

The CERF allocation, the news release added, will also allow agencies to respond to “critical water, sanitation and hygiene needs,” and help families keep their livestock alive so that they may return to agricultural activities as soon as possible.

“The most vulnerable families are living in temporary settlements along roadsides and in open spaces,” she noted. “People need life-saving humanitarian assistance to stop the suffering and to allow people to rebuild their lives and livelihoods.”

According to OCHA, Pakistan is the fourth-largest recipient of CERF funding, having received a total of $154 million of the more than $2.7 billion which the Fund has allocated since beginning its operations. 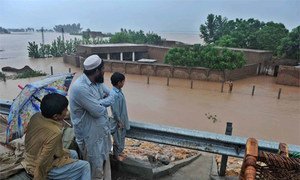 With nearly five million Pakistanis hit by floods that have already claimed some 400 lives, ruined tens of thousands of houses and vast swathes of crops, and left hundreds of thousands living in camps or simply under tarpaulins, the United Nations today appealed for more donations to bolster relief efforts.