The United Nations refugee agency today said it has pre-positioned thousands of emergency relief supplies in Aleppo, one of the most affected cities in the ongoing Syrian crisis, in anticipation of a possible truce during the Muslim holiday of Eid al-Adha at the end of the week.

The United Nations refugee agency today said it has pre-positioned thousands of emergency relief supplies in Aleppo, one of the most affected cities in the ongoing Syrian crisis, in anticipation of a possible truce during the Muslim holiday of Eid al-Adha at the end of the week.

“UNHCR has pre-positioned 5,000 emergency relief family kits in Aleppo, with another 5,000 on the way,” the chief spokesperson of the Office of the UN High Commissioner for Refugees (UNHCR), Melissa Fleming, told a news briefing in Geneva.

“If the truce happens, these materials could be delivered to 10,000 displaced families by implementing partners in places that we have previously been unable to reach around Aleppo and Idlib,” Ms. Fleming said, adding that the agency is also dispatching 1,000 recreational items that a local non-governmental organization, the Syria Trust for Development, will distribute this week to children living in communal shelters in Damascus and Aleppo.

Last week, while in Tehran, the Joint Special Representative of the UN and the League of Arab States for the Syrian crisis, Lakhdar Brahimi, appealed to Iranian authorities to assist in achieving a ceasefire in Syria during Eid al-Adha, or the Feast of the Sacrifice, which commemorates the willingness of Abraham to sacrifice his son Ishmael as an act of obedience to God.

The Secretaries-General of the UN and the League of Arab States – Ban Ki-moon and Nabil El Araby – also called on all warring parties in Syria to heed Mr. Brahimi’s call for a ceasefire and urged international actors to support this appeal.

Addressing another news briefing in Geneva, the UN World Food Programme’s (WFP) Regional Director for the Middle East, Central Asia and Eastern Europe, Daly Belgasmi, welcomed the possibility of the ceasefire as it would allow the food agency to preposition more food supplies, particularly areas made hard-to-reach because of the violence.

So far, WFP has managed to reach 1.5 million Syrians with food assistance, although access is still a major issue due to insecurity. Throughout the region, it has reached some 120,000 people, with this figures projected to increase to 460,000 people by June 2013.

Mr. Belgasmi said that refugees are being assisted through a cash voucher system, with families receiving $45 which enables them to buy quality food from local markets. In Turkey, with the assistance of the Turkish Red Crescent Society, WFP has managed to assist 13,000 Syrian refugees; in Lebanon, WFP aims to help at least 61,000 Syrian refugees, while in Jordan, the food agency reached 53,000 people in September.

In her briefing to reporters, Ms. Fleming said UNHCR has already distributed non-food aid packages to some 50,000 Syrian families and plans to reach 50,000 more by the end of the year. Last week, the agency also began rolling out a cash assistance programme for the displaced in the Hassakeh governorate.

So far, the refugee agency has provided cash assistance to some 5,230 families. Hassakeh is the second location to benefit from the programme, which was earlier piloted in the district of Al Nabek, where some 3,525 families received emergency funds.

In neighbouring countries, UNHCR continues to assist Syrians living in refugee camps, as well as those staying with relatives and host families in cities as the number of those displaced keeps increasing.

However, Ms. Fleming said that the recent unrest in Lebanon has temporarily disrupted UNHCR operations there, including the registration of refugees in the cities of Tripoli, Akar, Beirut and Saida. “We are assessing the security situation and hope to resume all operations as soon as conditions allow,” she said.

Last Friday, a bomb explosion struck the Lebanese capital of Beirut, resulting in numerous deaths and injuries. Among the dead was General Wissam al-Hassan, a senior commander in the Lebanese Internal Security Forces.

The bombing has been followed by civil unrest in the capital, heightening existing fears that the conflict in neighbouring Syria could spill over into Lebanon and exacerbate the delicate sectarian balance already existing in the country.

Ms. Fleming said that many of the refugees in Lebanon are struggling to make ends meet on the open economy and complain of high prices. To ease the strain, the Government announced last week that it will waive a fee for Syrians wishing to renew residency permits. In addition, some 16,000 refugees have received food, blankets, mattresses, hygiene kits and baby kits from humanitarian agencies including UNHCR, the UN World Food Programme (WFP), UN Population Fund (UNFPA), and UN Children’s Fund (UNICEF).

The refugee agency is also concerned over reports from governments in countries bordering Syria estimating that there are tens of thousands more Syrians who have not yet registered as refugees. Ms. Fleming noted how Egyptian officials recently reported that there may be as many as 150,000 Syrian nationals in the country, although very few have registered as refugees.

“UNHCR continues to stress the urgent need for international support to refugee programmes in these countries – nations that should not be expected to carry the entire burden themselves,” the chief spokesperson said, while also warning that more funding is needed to assist all those in need.

“Nearly four weeks after the launch of the $487.9 million revised Syria Regional Response Plan we remain only about a third funded, and we are racing against time to ensure that all of these hundreds of thousands of refugees are protected from the winter cold,” she added. 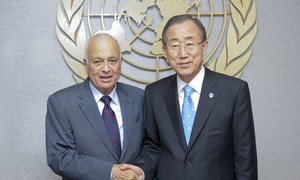 The Secretaries-General of the United Nations and the League of Arab States – Ban Ki-moon and Nabil El Araby – today called on all warring parties in Syria to heed the call of their Joint Special Representative, Lakhdar Brahimi, for a ceasefire in all its forms during the Muslim holiday of Eid al-Adha, and called on international actors to support this appeal.