United Nations Secretary-General Ban Ki-moon today met with Argentine Foreign Minister Héctor Timerman and congratulated Argentina on its accession to the Security Council for the 2013 – 2014 session.

In the meeting with Mr. Timerman, the Secretary-General thanked Argentina for its “steadfast support” of UN priorities and welcomed the South American nation’s new Permanent Representative-designate to the UN, Ambassador María Cristina Perceval.

On January 2013, Argentina will join Australia, Rwanda, the Republic of Korea and Luxembourg as a non-permanent member on the Security Council for a two-year term

The two men also discussed the ongoing diplomatic incident between Argentina and Ghana over the Fragata Libertad – an Argentine sailing ship used for naval training exercises which has been detained in Ghana’s port of Temma for almost three weeks, following an official request by local authorities.

According to media reports, a Ghanaian judge ordered the seizure of the ship at the behest of NML Capital Ltd, a hedge fund group demanding full compensation from the Argentine Government following the country’s financial default over a decade ago.

Mr. Ban acknowledged the Government of Argentina’s concern for the well-being of its crew members and voiced hope that both Buenos Aires and Accra would find a way to address the issue of a bilateral basis, in accordance with international law, including the UN Convention on the Law of the Sea, to which both nations are parties. 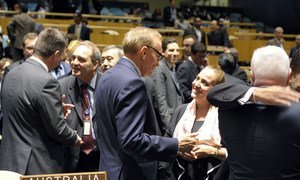 The United Nations General Assembly has elected Argentina, Australia, Luxembourg, the Republic of Korea and Rwanda to serve as non-permanent members on the Security Council for two-year terms beginning on 1 January 2013.