22 October 2012
A group of United Nations independent human rights experts today called on Colombian authorities to revisit the military criminal law provisions of proposed constitutional reforms, warning they could have serious implications for the rule of law, violate international law, and reverse the Latin American nation’s achievements in advancing respect for human rights.

“Should this reform be approved, it could seriously undermine the administration of justice for cases of alleged violations of human rights and international humanitarian law, including serious crimes, by military or police forces (Fuerza Pública),” the 11 independent experts said in an open letter to the Government and Congress of Colombia, focussing on their concerns over plans to reform the country’s Constitution.

“We believe that such a reform would represent a historic setback in terms of progress achieved by the State of Colombia in the fight against impunity and the respect and guarantee of human rights,” the experts stated, noting that it would send the wrong signal to members of the Fuerza Pública of the consequences of committing human rights and international humanitarian law violations.

“We have noted with serious concern that the constitutional reform project would expand the jurisdiction of military or police tribunals, giving them the power to investigate, process and decide on cases of human rights violations which should be under the authority of the ordinary criminal justice system,” the experts added.

The 11 experts who signed the letter included those mandated to monitor international human rights law in respect to executions, arbitrary detention, use of mercenaries, freedom of expression and assembly, judicial independence, torture, discrimination and violence against women, enforced disappearances and the situation of human rights defenders.

The proposed provisions, the experts continued, would establish a Penal Guarantees Court to deal exclusively with accusations against members of the military or police forces of the Fuerza Pública – a measure, they said, which could generate a climate of impunity by giving the impression that those charged were receiving preferential treatment.

“We believe that there is a real risk that Colombia’s obligations under international humanitarian and human rights law could be infringed if this reform is adopted, and would imply a significant retrogression in the efforts carried out by the Colombian State to overcome and prevent repetition of the notorious human rights violations committed in the past, particularly between 2003 and 2008, by members of the Fuerza Pública,” the experts wrote.

“Precisely as a result of these efforts, since 2009 Colombia has achieved a notable reduction in the reported occurrence of these types of violations, which raises the question of whether such a constitutional reform is needed,” they added.

While noting that crimes such as genocide, crimes against humanity and the crime of enforced disappearances would be excluded from the jurisdiction of military and police tribunals, the experts noted that the proposed reforms would also expand their jurisdiction, allowing them to investigate and decide on cases of other serious human rights violations – the 11 experts noted that these violations should be under the authority of the ordinary criminal justice system and courts.

The areas in which the military and police tribunals would have expanded jurisdiction include violations such as war crimes, sexual violence, extrajudicial executions, child recruitment or use, arbitrary detention, and torture. They also included violations touching on how individuals are treated, including outrages upon personal dignity, and taking of hostages.

The experts offered to help the Colombian authorities to develop the “necessary measures” to ensure a constitutional and legislative framework that “strengthens the fight against impunity and the achievement of peace in Colombia.” 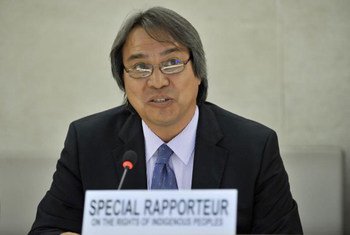 9 August 2012
A United Nations independent expert today called on the Government of Colombia to advance the dialogue process with indigenous authorities in the state of Cauca to find a solution to the recent military presence in their territory and other related matters.