The Secretaries-General of the United Nations and the League of Arab States – Ban Ki-moon and Nabil El Araby – today called on all warring parties in Syria to heed the call of their Joint Special Representative, Lakhdar Brahimi, for a ceasefire in all its forms during the Muslim holiday of Eid al-Adha, and called on international actors to support this appeal.

“This steps needs to be sustained. It could create the space to allow a peaceful political process that realizes the legitimate aspiration of the Syrian people for democracy, equality and justice,” Mr. Ban and Mr. El Araby said in a joint statement.

“The longer the violence lasts, the more difficult it will be to find a political solution and rebuild Syria,” the added.

In the statement, the Secretaries-General appealed to all, but in particular the Syrian Government as the stronger party, to “show wisdom and vision and stop the killing and destruction so that all the issues, however complex, can be addressed through peaceful means.”

Taking place on Friday, 26 October, the religious observance of Eid al-Adha – or the Feast of the Sacrifice – commemorates the willingness of Abraham to sacrifice his son Ishmael as an act of obedience to God.

According to the UN, more than 20,000 people, mostly civilians, have been killed since the uprising against President Bashar al-Assad began some 19 months ago. In addition, a further 2.5 million Syrians urgently need humanitarian aid, and over 340,000 have crossed the border to Syria’s neighbouring countries.

Earlier Friday, Mr. Ban strongly called on the Security Council and regional organizations to urgently act to stop the bloodshed and find peace for the people in Syria, warning that the prolonged conflict in the Middle Eastern country represents one of the greatest global security threats.

“The international community has a moral responsibility, a political duty and a humanitarian obligation to stop the bloodbath and find peace for the people of Syria,” Mr. Ban said in a speech at Drake University in the US state of Iowa, on the theme ‘Global Citizenship in a Changing World.’

“The conflict is now in its 20th month. According to estimates, 30,000 people have been killed. Syrian cities and villages lie in ruins. Appalling human rights abuses continue and the conflict rages on,” Mr. Ban said, warning that as winter approaches the humanitarian needs of 2.5 million Syrians are rapidly increasing.

The world body is currently providing food for 1.5 million people inside the country and providing shelter, health care and education assistant in Government-held areas, as well as those held by the opposition.

In addition, the Office of the UN High Commissioner for Refugees (UNHCR) is providing assistance to thousands of displaced people who have crossed the border into Iraq, Jordan, Lebanon and Turkey. According to the agency, at least 340,000 Syrian refugees have fled the country, with this number expected to more than double by the end of the year.

However, deteriorating conditions in the country have affected the ability of humanitarian agencies to operate. Over the past week, there have been reports from the World Health Organization (WHO) estimating that almost 70 per cent of the public hospitals have been damaged or destroyed and that half of the ambulances in the country have been attacked.

In his remarks, Mr. Ban noted that while humanitarian needs are increasing, the relief plan is only 40 per cent funded, and called for increased international support on this front.

“Every day, we see yet another heartbreaking image of a mother cradling her dead child – a father atop the rubble of his home – a child running for her life. And we are told, again and again, action is not possible – more study is needed – this resolution does not satisfy that parochial interest. Enough is enough,” Mr. Ban said.

The Secretary-General also reiterated his call on the Security Council, regional countries and all parties to live up to their obligations and take the necessary measures to ensure the success of Mr. Brahimi’s efforts in ensuring a ceasefire. 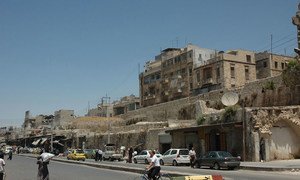 The Joint Special Representative of the United Nations and the League of Arab States on the Syrian crisis, Lakhdar Brahimi, today appealed to Iranian authorities to assist in achieving a ceasefire in Syria during the upcoming Muslim holiday of Eid al-Adha.