Efforts to assist the growing numbers of displaced children in Syria are continuing despite the escalating violence across the country and a large funding gap, the United Nations Children’s Fund (UNICEF) announced today.

Addressing a media briefing in Geneva, a UNICEF spokesperson, Marixie Mercado, reported that on-the-ground efforts to provide displaced families from the cities of Aleppo and Homs with supplies were ongoing, noting that the UN agency had already distributed family hygiene kits for 30,000 people, baby hygiene kits for 2,000, children’s winter clothes for 2,000 and the home-schooling education set known as ‘school-in-a-bag’ for 5,000.

Ms. Mercado pointed out that while the last estimate of displaced children in Syria was 600,000, though the numbers had grown since then.

In addition, almost 67 per cent of Syria’s public hospitals have been affected as a result of the conflict, and half of the country’s ambulances have been the subject of attack, leaving many of them out of service, according to UN World Health Organization (WHO). Vehicles transporting vaccinations have also been damaged, affecting the implementation of a national immunization programme.

Ms. Mercado told the gathered journalists that UNICEF-supported mobile health centres were also transporting critical health and nutrition support to displaced families across conflict-affected areas of the country. Moreover, she noted that doctors, teachers, youth and social workers were being trained and provided with supplies to assist children with psychosocial support.

The UNICEF spokesperson warned, however, that the agency’s efforts in Syria were facing a funding gap of close to $90 million out of a $132 million appeal.

Addressing the same news briefing, a spokesperson for the UN Office for the Coordination of Humanitarian Affairs (OCHA), Jens Laerke, said that the effects of the almost two year-long conflict had devastated the Syrian economy with gross domestic product reportedly falling by three per cent in 2011 compared to the previous year, and inflation topping 36 per cent in July of 2012.

“All these factors combined with the on-going hostilities have humanitarian consequences that OCHA is trying to address,” he added. 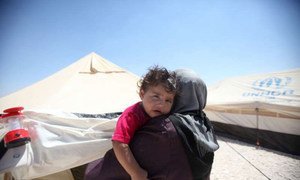 The United Nations and its humanitarian partners today issued a revised appeal for nearly $488 million to assist the rapidly increasing numbers of Syrian refugees in Jordan, Lebanon, Iraq and Turkey.