18 October 2012
Africa’s rise may see a decline in strong-man attitudes during electoral processes, according to a senior United Nations official who stressed that although elections have become more regular on the continent, their quality and credibility are increasingly being called to question.

“As Africa grows, more and more of its citizens become better informed and urbanized; they will expect a bigger participation and a different political dispensation,” the Executive Secretary of the UN Economic Commission for Africa (UNECA), Carlos Lopes, told the African Governance Forum, which serves as a platform for policy debate on governance throughout the continent, at a meeting which ends today in Gaborone, Botswana.

When elections are denuded of substance and value, they lose their intrinsic benefits, he said, adding that “deep structural economic inequalities, social polarization amongst groups, communities, and individuals, or unstable political transitions can exacerbate electoral violence.”

“When elections are fragrantly manipulated and rigged, when harassment, intimidation and blackmail characterize the electoral process, violence is around the corner,” he noted.

Citing examples from recent electoral violence in Kenya, Côte d’Ivoire and Zimbabwe, he said electoral violence leaves countries worse off than ever before and in most cases, “decelerates the rate of economic growth, reduces the inflow of foreign direct investment, affects tourism, fuels inflation and unemployment, and generally impacts negatively on economic activities.”

In the case of Kenya’s post-elections crises in 2007/2008, the economic cost of the violence was estimated at around $3.6 billion in addition to the social costs incurred, such as the destruction of lives and property, high incidence of internally displaced persons (IDPs), general social dislocation, humanitarian crisis, and worsening inter-group relations in the country, he noted.

Although Kenya has recovered considerably since then, he added, memories of the 2007 carnage continue to linger and are likely to result in further drops in tourism as the country draws near to another major national elections in 2013.

Mr. Lopes pointed out that efforts have been made to address the cycle of electoral violence, such as through policy design and landmark political initiatives. These include ‘rescue’ scenarios, such as power-sharing arrangements, reform of electoral bodies and the judiciary and bodies such as the Kenya National Cohesion and Integration Commission, to prevent hate and inflammatory speeches that may instigate political violence.

“More recently we have seen the prosecution of perpetrators of electoral violence and measures to put possible perpetrators, including governments organizing the elections, on notice,” he said.

He outlined a number of preventative safeguards and policy measures with respect to the conduct of elections, in areas to do with electoral institutions, resources, transparency in counting and collating results; role of civil society, prosecution of perpetrators, and banning of leaders who mobilize for electoral violence from political process.

UNECA, which Mr. Lopes heads, is headquartered in Addis Ababa, Ethiopia. Its is one of the UN's five regional commissions, with a mandate is to promote the economic and social development of its member States, foster intra-regional integration, and promote international cooperation for Africa's development. 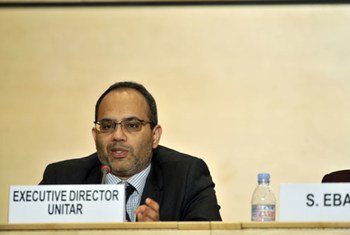