18 October 2012
The elimination of sexual violence in conflict is not impossible, a United Nations senior official said today, stressing that to fully eradicate this scourge there needs to be a stronger political will from governments as well as adequate legal frameworks in place to prosecute perpetrators.

“As daunting as the road ahead is, I do not think eradicating sexual violence in conflict is a mission impossible,” the Secretary-General’s Special Representative on Sexual Violence in Conflict, Zainab Bangura, told reporters in Geneva.

“We have the tools to combat this scourge, but we need the political will to implement the relevant Security Council resolutions and a commitment from governments to enforce them,” she added.

Ms. Bangura outlined six objectives she will pursue in her new capacity. They consist of: addressing impunity and justice for victims; protecting and empowering affected women; strengthening the political will for implementing Security Council resolutions pertaining strategies to combat and prosecute sexual violence; coordinating the response of the international community to sexual violence; understanding rape as tactic of war; and encouraging local and national ownership of the problem and its solution.

“Sexual violence in conflict needs to be treated as the war crime that it is,” she said. “It can no longer be written off or treated as an unfortunate collateral damage of war or unavoidable byproduct of political strife.”

Ms. Bangura stressed that the problem is not particular of one region, but is recurrent all over the world. “This is not only a women’s issue and it is a global issue. It is occurring in Serbia, Cambodia, Sudan, Sri Lanka, Colombia, and Nepal, among others,” she said.

In addition, the Special Representative underlined that the focus must shift from the victim who is stigmatized by society to the perpetrator.

“We must work with national governments. We must allow them and force them to take leadership in this to be able to build a national framework that will be able to ensure that the cases are prosecuted and the victims have their day in court. Let us put the light on the perpetrators not the victims,” Ms. Bangura said, noting that to do this it will be necessary to build capacities to investigate sexual violence, train magistrates to prosecute these sexual violence crimes, and help countries build legal frameworks.

She added, “The message for perpetrators must be ‘there is no hiding place in the world. Wherever you are we will get you.’” 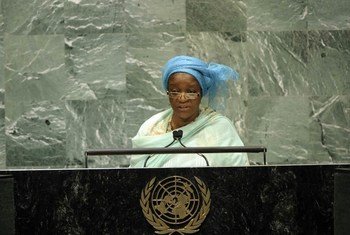 Perpetrators of mass rapes in Guinea must be brought to justice, stresses UN official

28 September 2012
A senior United Nations official has stressed the need to assist the victims of the mass rapes that occurred three years ago today during a pro-democracy protest in the Guinean capital, Conakry, and to bring the remaining perpetrators to justice.