18 October 2012
The Middle East and North Africa will continue to present major human rights challenges – and opportunities – for “many years to come,” the United Nations High Commissioner for Human Rights, Navi Pillay, said today, stressing in particular the need to do more to end the ongoing conflict in Syria.

“The situation in Syria is quite simply dire,” said Ms. Pillay. “With no end in sight, and no solutions within easy grasp, we are in danger of becoming inured to the horrors that Syrian civilians are suffering day in and day out. But we cannot simply shrug and turn away.”

Speaking at a news conference in Geneva, Ms. Pillay said that the situation is likely to descend into an all-out sectarian conflict, as the international community remains divided on how to end the crisis, which began as an uprising against the regime of President Bashar al-Assad 20 months ago and has left more than 20,000 people dead and another 2.5 million in need of humanitarian aid.

“The memories of what happened in Bosnia and Herzegovina should be sufficiently fresh to warn us all of the danger of allowing Syria to descend into all-out sectarian conflict,” she stated.

“Thousands and thousands of men, women and children have already been killed, injured, tortured, displaced. It should not take something as drastic as Srebrenica to shake the world into taking serious action to stop this type of conflict,” the UN official added. “By remaining divided, the international community is enabling the continuation of the suffering and helping create the circumstances for a wider regional conflict.”

She also noted that much work needs to be done in Egypt, Libya, Tunisia and Yemen – all undergoing their own democratic transitions after ousting long-standing regimes – to ensure that the human rights and aspirations of all their people are respected, without discrimination and in accordance with international standards.

“The situations in each of these four countries are very different from each other, and solutions will need to be carefully tailored to the rapidly changing circumstances,” said Ms. Pillay, noting that Libya in particular is “extremely fragile” after so many years of “disastrous misrule” by Muammar al-Qadhafi. The North African country has been undergoing a transition toward a modern democratic State, after decades of autocratic rule and the toppling of the al-Qadhafi regime.

The human rights situation in Afghanistan will also require continued monitoring and support as the transfer of security responsibilities and withdrawal of foreign forces proceeds over the coming years, the High Commissioner, who began her second term last month, pointed out.

She also highlighted some “neglected” situations that she intends to shine more of a spotlight on over the next two years, including the human rights situation in the Democratic People’s Republic of Korea (DPRK).

The human rights of people living in areas that are the subject of unresolved territorial disputes are also often neglected, she noted, adding that one such example is Jammu and Kashmir in India, where the discovery of 2,730 bodies in unmarked mass graves was confirmed in a 2011 report by the Jammu and Kashmir State Human Rights Commission.

“I urge the Indian authorities to fully investigate past killings and disappearances and bring the perpetrators to justice, as well as to ensure protection of witnesses and families of the missing and provide them with redress,” the High Commissioner stated. “These will be critical steps in the ongoing effort to build confidence with the aim of promoting lasting peace and stability in the region.”

To deal with these and numerous other issues, she added, it is critical to increase the resources available to the Office of the UN High Commissioner for Human Rights (OHCHR), which will celebrate its 20th anniversary next year.

“As we approach our 20th anniversary, the UN human rights system is at a pivotal moment in its history. Human rights are so wide-ranging and all-encompassing, and, sadly, still so commonly abused, that clearly we need to become bigger, better, faster, and stronger,” Ms. Pillay said.

She added, “There is very little fat to cut, and I fear unless more donors, both governmental and private, come to the rescue, the damage to our operations could be considerable, and the much-needed momentum gained over the past few years risks being halted in its tracks.” 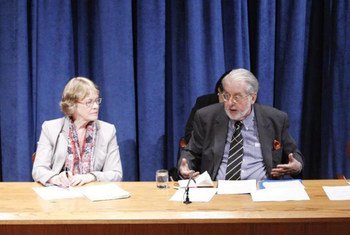 16 October 2012
The Syrian crisis can only be resolved through diplomatic means, the head of a United Nations-backed inquiry today urged, while warning that the conflict in the Middle Eastern country was steadily worsening amid the growing presence of armed jihadist groups.