A South African peacekeeper serving with the United Nations-African Union Mission in Darfur (UNAMID) was killed and three others wounded in an ambush in the west Sudanese region of Darfur today, the second such deadly attack on UNAMID in two weeks.

According to an UNAMID news release, a Mission convoy of military, police and civilian personnel came under a combination of automatic and mortar fire from unidentified assailants while on its way from the town of Kutum to the town of Hashaba North, 56 kilometres northeast of Kutum, to assess the situation following recent reports of violence in that area. The convoy returned fire.

“These attacks will not shake our resolve to fulfil our mandate and help the people of Darfur,” said UNAMID’s Acting Joint Special Representative and Joint Chief Mediator ad interim, Aïchatou Mindaoudou. “I call on the Government of Sudan to investigate the incident and bring the perpetrators to justice.”

The UNAMID official’s calls for an investigation into the incident and for the perpetrators to be brought to justice were echoed by Secretary-General Ban Ki-moon, according to the UN chief’s spokesperson, as well as the Security Council.

Mr. Ban’s spokesperson noted that the Secretary-General condemns “in the strongest possible terms” the attack and expresses his condolences to the Government of South Africa, UNAMID and the family of the fallen peacekeeper.

In a press statement, the members of the Security Council also condemned “in the strongest terms” the attack and expressed their condolences to the family of the deceased peacekeeper, as well as the Government of South Africa and UNAMID, in addition to calling on the Government of Sudan to swiftly investigate the incident and bring the perpetrators to justice.

The Security Council members also reiterated their full support for UNAMID and called on all parties in Darfur to cooperate with the Mission.

UNAMID is entrusted with protecting civilians, promoting an inclusive peace process and helping ensure the safe delivery of humanitarian aid across Darfur, the scene of fighting between Sudanese Government troops and their allied militias and rebels since 2003. Since its initial deployment at the start of 2008, 43 peacekeepers have been killed by hostile action.

Four Nigerian UNAMID peacekeepers were killed and eight wounded at the beginning of the month in an ambush near a regional Mission headquarters in El Geneina, the capital of West Darfur state. 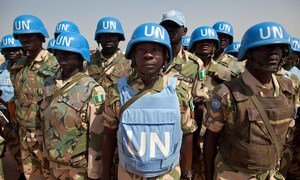 Secretary-General Ban Ki-moon is appalled and deeply saddened by a deadly attack on United Nations peacekeepers in the west Sudanese region of Darfur on Tuesday, according to his spokesperson.