17 October 2012
The United Nations Security Council has a vital role to play in assisting the International Criminal Court (ICC) to ensure that war crimes and crimes against humanity around the world do not go unpunished, Secretary-General Ban Ki-moon said today.

Mr. Ban was speaking at the start of a day-long Council debate on the role of the Hague-based ICC, an independent international body that is not part of the UN and tries those accused of genocide, crimes against humanity and war crimes.

Any of the currently 121 States Parties to the 1998 Rome Statute which set up the ICC can ask its prosecutor to carry out an investigation, a non-State Party can accept its jurisdiction for crimes committed in its territory or by its nationals, and the Council may also refer cases to it. Its mandate is to try individuals, rather than States.

“The Council, where it has referred a situation to the Prosecutor, can greatly assist the Court by acting to secure the necessary level of cooperation from Member States,” Mr. Ban said. “Both should explore the many ways in which they can complement and leverage each other's work, from prevention to enforcement.”

More than 50 UN Member States were scheduled to speak at the Council meeting, formally called an open debate on ‘Peace and Justice with a Special Focus on the Role of the International Criminal Court.’

In its first verdict, the ICC in March found Congolese warlord Thomas Lubanga Dyilo guilty of conscripting child soldiers under the age of 15 into his militia in the Democratic Republic of the Congo (DRC) and jailed him for 14 years.

In his remarks to the Council meeting, ICC President Sang-Hyun Song highlighted the intertwined nature of the two institutions: the Council with its focus on peace and the ICC with its goal to seek justice.

“While the ICC's contribution is through justice, not peacemaking, its mandate is highly relevant to peace as well,” he told the 15-member body, stressing the Council’s role to ensure that full cooperation from Member States.

“The worst nightmares of humanity lie at the intersection of our respective mandates. When massive crimes against innocent victims threaten international peace and security, both the

Council and the ICC have an important role to play,” he added. “And in the ICC, the Council may recognise a unique avenue for ensuring justice as a crucial element in wider international efforts.”

Speaking on behalf of ICC Prosecutor Fatou Bensouda, the Director of the court’s Jurisdiction, Complementarity and Cooperation Division, Phakiso Mochochoko, stressed that the relationship between the Office of the Prosecutor and the Council could be nurtured and strengthened by extending interaction beyond specific situations referred by the Council and creating space for open discussions on thematic issues.

“The Council and the Office should together seek more constructive strategies for attaining their mutual goals,” he said.

The Council has already referred two cases to the ICC over alleged crimes committed in Libya and Sudan’s Darfur region, and Mr. Ban noted that it is also investigating, prosecuting and trying situations on the Council’s agenda, such as persons from the DRC, Côte d’Ivoire and the Lord’s Resistance Army, the rebel group allegedly responsible for atrocities in Uganda and neighbouring countries.

“Only if perpetrators of grave crimes are prosecuted and held to account, can there be any hope that future such crimes will be prevented and peace preserved,” the UN chief said, underlining the role that the both bodies can both play in strengthening national capacities to prosecute serious crimes – the Council through its peacekeeping missions, and the ICC through the domestic incorporation of provisions of the Rome Statute. 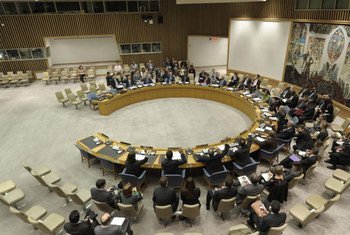 16 March 2012
The Security Council today noted with appreciation the issuance of the first verdict of the International Criminal Court (ICC), which this week found Congolese warlord Thomas Lubanga Dyilo guilty of conscripting child soldiers under the age of 15 into his militia.