Shareef Sarhan
A woman and her children collect firewood and paper for baking bread in Ezbet Abd Rabbo, Gaza.

17 October 2012
With inequalities growing dramatically both within and between countries over the last 10 years, the United Nations marked the International Day for the Eradication of Poverty today with calls to tackle not only the material aspects of the scourge but also its social and educational dimensions and the unequal access to justice.

“Poverty is easy to denounce but difficult to combat,” Secretary-General Ban Ki-moon said in his message for the Day. “Those suffering from hunger, want and indignity need more than sympathetic words; they need concrete support.”

Mr. Ban stressed that during times of economic austerity it is even more crucial to put policies in place that will protect the most vulnerable.

“As governments struggle to balance budgets, funding for anti-poverty measures is under threat. But this is precisely the time to provide the poor with access to social services, income security, decent work and social protection,” he said. “Only then can we build stronger and more prosperous society – not by balancing budgets at the expense of the poor.”

With the fight against poverty at the core of the UN development agenda, the International Day for the Eradication of Poverty has been observed every year since 1993, when the UN General Assembly designated this day to promote awareness of the need to eradicate poverty and destitution in all countries.

This year’s theme for the Day, ‘Ending the Violence of Extreme Poverty: Promoting Empowerment and Building Peace,’ highlights the link between poverty and social unrest, as well as the need to provide people with the necessary skills to contribute to society.

“Poverty is not merely a matter of minimum income thresholds or insufficient resources, nor must it be remedied only through charity or wealth redistribution schemes,” the Director-General of the UN Educational, Scientific and Cultural Organization (UNESCO), Irina Bokova, said in her message for the Day.

“There is educational, cultural, scientific and social poverty, which is the corollary of material poverty and must be combated with the same determination,” she added. “Poverty results in deprivation of individual capacities for development and in the lack of autonomy. Poverty eradication entails building each person’s capacity to create wealth and to tap each human being’s inner potential.”

Ms. Bokova noted that despite overall economic development worldwide, more than one billion people live in extreme poverty, which the World Bank defines as living on less than $1 a day.

“This situation is a violation of basic human rights and an obstacle to development,” she said. “Progress is within our reach. Since 2000, extreme poverty has been halved. This proves that with political will and the joint commitment of States, outcomes can be achieved. To succeed, we must redouble our efforts to combat new forms of poverty and social exclusion. We must also understand all aspects of poverty in order to tailor our response appropriately.”

She stressed that quality education, scientific development and cultural diversity are essential strategic tools for developing human intelligence and enabling people to take control of their future.

In a separate message, the UN Special Rapporteur on extreme poverty, Magdalena Sepúlveda, called on States to take immediate measures to ensure access to justice by the poorest segments of society, stressing that such access is a human right in itself and essential for tackling the root causes of poverty.

“Without access to justice, people living in poverty are unable to claim and realize a whole range of human rights, or challenge crimes, abuses or violations committed against them,” she said.

She also highlighted the financial, social and physical barriers that prevent the poor from accessing justice and perpetuate and exacerbate their disadvantage, noting that they are often unable to seek justice due to the cost and time of travel to a distant courthouse, fees charged for filing claims or lack of free, quality legal assistance.

“Lack of information about their rights, illiteracy or linguistic barriers, coupled with entrenched stigma attached to poverty, also makes it harder for the poor to engage with the justice system,” she noted. “In such circumstances, a person living in poverty cannot uphold their rights or challenge injustice.”

To mark the Day, representatives of governments and civil society will gather at UN Headquarters in New York to discuss how poverty violates fundamental rights and the need to build on the successes of the anti-poverty goals known as the Millennium Development Goals (MDGs) to intensify anti-poverty efforts. 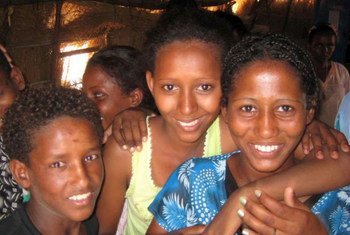 18 October 2011
The United Nations refugee agency today condemned the deportation of more than 300 Eritrean refugees and asylum-seekers by Sudan after weeks of detention and in spite of a previous agreement with the UN.