15 October 2012
The United Nations’ top anti-crime official today called for integrated international and civil society initiatives to choke off crime syndicates that have shown they can evade justice by quickly shifting to a new location when the law catches up with them at an initial location.

“Our collective goal must be to end the 'era of displacement,’ which sees crime simply move elsewhere when challenged, and to begin a time of interconnected cooperation, coordination and communication against crime,” the Executive Director of the UN Office on Drugs and Crime (UNODC), Yury Fedotov, said in Vienna, at the opening of the sixth session of the conference of parties to the UN Convention against Transnational Organized Crime.

Adopted by the UN General Assembly in 2000, the Convention – supplemented by three protocols – is the main international instrument in the fight against transnational organized crime. The conference provides an opportunity to improve the capacity of States which are party to the Convention to combat transnational organized crime and to promote and review its implementation.

In his remarks, Mr. Fedotov included civil society as having an indispensible role to play in solving the challenges of transnational organized crime, according to an UNODC news release, which cited the agency chief as saying “largely opportunistic” criminal enterprises preyed on countries where the rule of law and institutions were vulnerable to criminals.

“We are able to quantify the cost of transnational organized crime, it is $870 billion, but we cannot calculate the misery and suffering caused to millions of people by these illicit activities,” said Mr. Fedotov.

Among victims of transnational crime, he cited women and children trafficked for sex, communities in developing countries devastated by illegal logging, and family and friends of someone lost to illicit drugs.

The UNODC chief said Member States needed to be “creative and proactive” in the exchange of ideas and information on what is working in the global fight against drugs and crime. This, according to UNODC, would enable them to deliver “timely strategic activities in an integrated manner. “We must take lessons learned and create practical policies,” noted Mr. Fedotov

A range of representatives from national governments and civil society are among some 800 participants attending the Conference, which ends on 19 October. 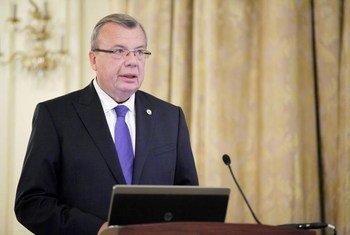