15 October 2012
Targets for reducing the proportion of hungry people around the world by half can still be reached if countries step up their efforts to reduce hunger, top United Nations officials announced today.

Targets for reducing the proportion of hungry people around the world by half can still be reached if countries step up their efforts to reduce hunger, top United Nations officials announced today.

Speaking at the opening session of the Committee on World Food Security (CFS) in Rome, the Director-General of the Food and Agriculture Organization (FAO), José Graziano da Silva, declared that “important progress” had been made in cutting the number of hungry people by 132 million since 1990. He added that the proportion of those hungry in the developing world also fell in the developing world from 23.2 per cent to 14.9 per cent over the same period.

Set up in 1974 and reporting to the UN Economic and Social Council (ECOSOC), the CFS, an intergovernmental body, serves as a forum for review and follow up of food security policies.

With reforms over the years, it is now the world’s leading platform for discussions on food security issues and is open to participation by civil society, private sector, and international and regional organizations concerned with related issues. As many as 18 government ministers from around the world are expected to attend this year’s session.

In his remarks to the gathering, Mr. Graziano da Silva, said that further efforts were required in order to achieve the UN’s Millennium Development Goals’ (MDGs) 2015 deadline for decreasing the number of hungry worldwide.

“As we renew and increase our commitment to reach the Millennium Development Goal for hunger reduction, let’s look beyond it, towards the total eradication of hunger because, when it comes to hunger, the only acceptable number is ‘zero,’” he said.

At the same time, the FAO chief expressed concern over the findings recently released in the FAO’s State of Food Insecurity in the World 2012 report, which stated that almost 870 million people, or one in eight, are still suffering from chronic malnutrition.

In his address to the CFS, by video message, UN Secretary-General Ban Ki-moon also urged greater action in fighting global hunger, and pointed to his ‘Zero Hunger Challenge’ – an initiative he first proposed at the UN Conference on Sustainable Development (Rio+20) in Brazil in June.

The Challenge aims for a future where every individual has adequate nutrition and where all food systems are resilient. Its five objectives are to make sure that everyone in the world has access to enough nutritious food all year long; to end childhood stunting; to build sustainable food systems; to double the productivity and income of smallholder farmers, especially women; and to prevent food from being lost or wasted.

“You are at the heart of the next big push – eliminating hunger in our lifetimes,” Mr. Ban told the gathered delegates. 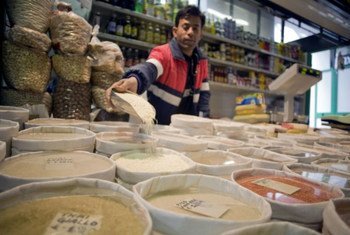 6 September 2012
The United Nations today reported that global food prices remained steady in August, but warned that the international community should continue to be vigilant and seek to prevent sharp price increases.