On International Day of Rural Women, Ban calls for more empowerment and end to discrimination

Highlighting the role in women in producing much of the world’s food and caring for the environment, Secretary-General Ban Ki-moon, in his message marking the International Day of Rural Women, today said that eliminating discrimination that prevents rural women from realizing their full potential is crucial to ending global hunger and poverty.

Highlighting the role in women in producing much of the world’s food and caring for the environment, Secretary-General Ban Ki-moon, in his message marking the International Day of Rural Women, today said that eliminating discrimination that prevents rural women from realizing their full potential is crucial to ending global hunger and poverty.

“By denying women rights and opportunities, we deny their children and societies a better future,” he said, noting that the daily reality for too many rural women is one in which they do not own the land they farm and are denied the financial services that could lift them out of poverty.

Established by the General Assembly in December 2007, the Day – observed on 15 October – recognizes the role and contribution of rural women, including indigenous women, in enhancing agricultural and rural development, improving food security and eradicating rural poverty.

In his message, the UN chief said rural women often live without the guarantee of basic nutrition, health services and amenities such as clean water and sanitation, while unpaid care work imposes a heavy burden and prevents their access to decent wage employment.

“When food and nutrition security are improved, rural women have more opportunities to find decent work and provide for the education and health of their children,” Mr. Ban said. “With equal access to land, credit and productive resources, rural women can increase their productivity and sell their goods. As equal members of society, rural women can raise their voices as decision-makers and propel sustainable development.”

He noted that, in September, the UN launched a five-year initiative, entitled Accelerating Progress Toward the Economic Empowerment of Rural Women, which seeks to empowerment through economic integration and food security initiatives.

The programme will be carried out jointly by the world body’s overall women’s agency, the UN Entity for Gender Equality and the Empowerment of Women (UN Women), and the three Rome-based UN food agencies – the Food and Agriculture Organization (FAO), the International Fund for Agricultural Development (IFAD), and the World Food Programme (WFP). It will be implemented initially in Ethiopia, Guatemala, Kyrgyzstan, Liberia, Nepal, Niger and Rwanda.

“The world has increasingly recognized the vital role that women play in building peace, justice and democracy,” Mr. Ban said in his message. “As we approach the 2015 deadline for achieving the Millennium Development Goals (MDGs), it is time to invest more in rural women, protect their rights, and improve their status.

The eight MDGs, adopted at the UN Millennium Summit in 2000, seek to sharply curb a host of social ills, including extreme poverty and hunger, maternal and infant mortality, diseases and lack of access to education and health services, all by 2015.

“On this International Day, I call on all partners to support rural women, listen to their voices and ideas, and ensure that policies respond to their needs and demands,” Mr. Ban added. “Let us do everything we can to enable them to reach their potential for the benefit of all.”

♦ Receive daily updates directly in your inbox - Subscribe here to a topic.
♦ Download the UN News app for your iOS or Android devices.
women|rural 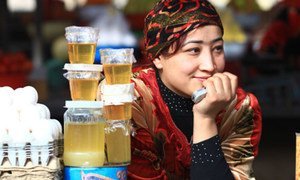