The Joint Special Representative of the United Nations and the League of Arab States on the Syrian crisis, Lakhdar Brahimi, has just concluded a visit to Turkey where he discussed the continuing violence in Syria with President Abdullah Gul and Foreign Minister Ahmet Davutoglu.

During a meeting in the Turkish city of Istanbul, the three men talked about the adverse effect of the conflict on the region and the urgent need to find a way to stop the bloodshed and alleviate the suffering of the Syrian people, according to a statement issued by Mr. Brahimi's spokesperson.

More than 20,000 people, mostly civilians, have died in Syria since the uprising against the regime of President Bashar al-Assad began some 19 months ago. A further 2.5 million Syrians urgently need humanitarian aid, according to UN estimates.

While in Istanbul, Mr. Brahimi also met the Chairman of the opposition Syrian National Council (SNC), Abdel Bassett Sida, and members of the SNC Executive Committee, as well as other members of the Syrian opposition.

Mr. Brahimi has been holding talks with leaders in the region, including the Syrian Government, to find a solution to the prolonged crisis. Earlier this week, he met in Jeddah with the King of Saudi Arabia, Abdullah Bin Abdulaziz Al-Saud, as well as the Saudi Deputy Foreign Minister, Prince Abdelaziz Bin Abdallah. 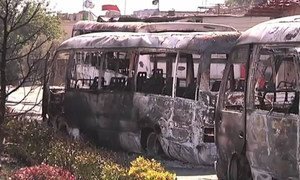 Secretary-General Ban Ki-moon strongly condemned the string of coordinated terrorist bombings in the Syrian capital of Damascus on Monday night that resulted in numerous deaths and injuries, urging all sides to move towards a political transition and dialogue.