12 October 2012
The Security Council today extended the United Nations peacekeeping mission in Haiti for another year, and decided to reduce the overall force levels as responsibility for security is gradually handed over to the national police.

Acting unanimously, the 15-member Council extended the UN Stabilization Mission in Haiti (MINUSTAH) until 15 October 2013 so that it can continue to help restore a secure and stable environment, to promote the political process, to strengthen Haiti’s Government institutions and rule-of-law-structures, as well as to promote and to protect human rights.

It also decided that MINUSTAH’s overall force levels will consist of up to 6,270 troops – reduced from the authorized military strength of 7,340 – of all ranks through “a balanced withdrawal” of infantry and engineering personnel, and of a police component of up to 2,601 personnel, consistent with the proposals in Secretary-General Ban Ki-moon’s most recent report

In the report, Mr. Ban stated that the Mission’s consolidation proposals assume that its military component will gradually hand over responsibility for security to formed police units and, ultimately, to the national police as the latter’s numbers and capacity grow.

The transfer from military to formed police units is already completed in four of the ten departments – South, Grand-Anse, Nippes and North-West – he noted. By July 2013, MINUSTAH intends to concentrate its military presence into five security hubs in Port-au-Prince, Léogâne, Gonaïves, Cap-Haïtien and Ouanaminthe.

“This gradual concentration of the military presence would be balanced by the deployment of formed police units to the vacated departments, a transition model that has already proved effective,” he wrote.

Also by today’s resolution, MINUSTAH’s police component – currently authorized at 3,241 – will be reduced to 2,601.

“The strengthening of the national police remains a key prerequisite for the Mission’s eventual withdrawal from Haiti,” Mr. Ban stated, adding that recent steps by the Government, with the Mission’s assistance, to increase the numbers of police recruits, in particular female recruits, are encouraging and should help to accelerate the currently insufficient intake of new police cadets.

The Security Council established MINUSTAH in June 2004. In addition to its mandated tasks, it has been helping support Haiti’s authorities with recovery efforts in the wake of massive earthquake which struck in January 2010. 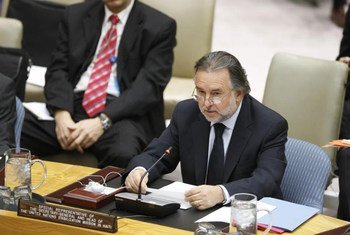 3 October 2012
Haiti must focus on strengthening its rule of law institutions, including its national police and electoral council, to consolidate the gains it has achieved in recent years, the United Nations Security Council heard today as it reviewed developments in the Caribbean country.