With nearly five million Pakistanis hit by floods that have already claimed some 400 lives, ruined tens of thousands of houses and vast swathes of crops, and left hundreds of thousands living in camps or simply under tarpaulins, the United Nations today appealed for more donations to bolster relief efforts.

“In some areas people stranded in flood waters are still being rescued by boats to safer places,” a spokesperson for the UN Office for the Coordination of Humanitarian Affairs (OCHA), Jens Laerke, told a news briefing in Geneva. “The immediate needs are on food, emergency shelter, health water and sanitation and hygiene services.”

In addition, the UN World Food Programme (WFP), which has built up its emergency response capacity with all the necessary logistical and communications support, said today it still needs contributions from international donors, with a total goal of $29 million – including $6.5 million for milling, fortifying, transporting and distributing wheat donated by the governments of Balochistan and Sindh, two of the provinces most affected.

For the third consecutive year, severe monsoon flooding has delivered a crippling blow to millions of people who were already suffering from high food prices, malnutrition and poverty, according to WFP. In the five worst-affected districts of Sindh and Balochistan, between 1.2 million and 1.3 million people are estimated to be in need of food assistance.

“Once again, there have been heavy losses of livestock, food stocks and seeds,” the food relief agency said in a media update. “With huge areas of land still under up to 2.5 metres of water, the prospects for planting the upcoming Rabi crop (sown in winter) look remote in the affected areas. It will be several months before families are able to resume their normal lives and livelihoods.”

It added, “In the meantime, hundreds of thousands of people are living in temporary camps or simply under tarpaulins on the roadside, where they can do little but wait for the waters to subside.”

At the request of Pakistan’s National Disaster Management Authority, WFP has distributed a one-month ration to some 140,000 people in Sindh and Balochistan and preparations are under way to provide a one-month ration for 1.2 million people, followed by two one-month rations for 700,000 of the most severely food insecure. The WFP food basket consists of dietary staples of fortified wheat flour, pulses, vegetable oil and iodized salt, as well as high energy biscuits.

One flood victim, Adam Khan, from Naseerabad district in Balochistan, told WFP that he and his family were only just beginning to recover from the previous floods when this year’s disaster hit. He lost all his livestock: goats, a buffalo and a donkey. Now, he says, he is back to zero:

“We have lost our crops and seeds for the next season,” he said. “The loans we took out for the next crop are gone for nothing. We need these loans to be written off and for us to be provided with free seeds and fertilizers. Everything is gone. We have been left out in the open on the roadside. Please, for the sake of God, help us in Naseerabad!”

A major concern of WFP is that while fewer districts were affected by flooding this year than in 2011, those that were affected were hit in a particularly dramatic fashion. The agency noted the fact that one month after the rains, the waters are still so deep and covering such a large area indicates that the suffering of the flood victims is likely to continue for many weeks to come. 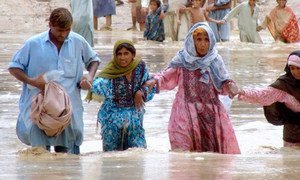 The United Nations today announced it has begun food distributions to tens of thousands of people affected by monsoon floods in the Sindh province of Pakistan, adding that it plans to expand assistance to the Balochistan province later this week.