SCSL
The Special Court for Sierra Leone in Freetown.

Two of them are already serving long prison terms for war crimes and crimes against humanity committed in the civil wars that plagued the West African country, starting in 1996, while a fourth person convicted last month with the other three received a suspended sentence.

Santigie Borbor Kanu (aka Five-Five) and Ibrahim Bazzy Kamara were sentenced to two years in prison on each of two counts of interfering with the administration of justice by offering a bribe to a witness, and for otherwise attempting to induce a witness to recant testimony he gave before the Special Court for Sierra Leone (SCSL). The terms are to be served concurrently.

Hassan Papa Bangura (aka Bomblast) was sentenced to two 18-month prison terms, to run concurrently, after being convicted on similar charges. Mr. Kamara and Mr. Kanu are currently serving 45 and 50-year terms, respectively, for war crimes and crimes against humanity.

A fourth accused, Samuel Kargbo (aka Sammy Ragga), pleaded guilty at his initial appearance in July 2011, subsequently testified for the prosecution, and today received two 18-month suspended sentences, meaning that he will serve no jail time as long as he remains of good behaviour for the next two years.

During the four-month trial, the court held proceedings at the SCSL’s premises in Freetown, Sierra Leone’s capital, where Mr. Bangura and Mr. Kargbo attended, and in a courtroom in Kigali, Rwanda, where Mr. Kamara and Mr. Kanu have been sent to serve their sentences. The two courtrooms were connected by video link.

Based in Freetown, the SCSL was set up in 2002 to try those most responsible for serious violations of international humanitarian law in the civil wars that plagued the country, starting in 1996. 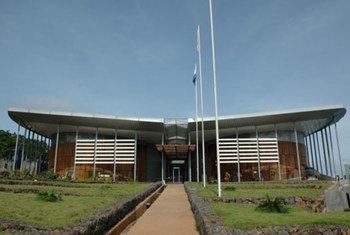