11 October 2012
A United Nations independent expert today welcomed Hungary’s commitment to address the environmental impact of the industrial accident that occurred at the Ajka aluminium plant in 2010, and called for greater efforts to make polluting companies more accountable.

“Justice is distorted when the victim pays for the conduct of the accused,” said the Special Rapporteur on toxic waste, Calin Georgescu, at the end of his information-gathering mission to Hungary – the first of its kind – in which he investigated the implications for human rights of the environmentally sound management of hazardous substances and wastes.

“I remain concerned that, without improved accountability of some of the highly polluting industries in Hungary, people will remain at the mercy of some of these companies that evade liability and instead it is innocent people who will bear the brunt of the impact and pay with their health, lives and property,” he added.

The Ajka aluminium plant incident remains the country’s greatest industrial accident and ecological catastrophe, affected the communities of Kolontár and Devecser, with fatalities, injuries to residents and volunteers, and extensive environmental damage that so far has cost some $910million to remediate, according to the Office of the UN High Commissioner for Human Rights (OHCHR).

During his mission, Mr. Georgescu focused on the consequences of the Ajka industrial incident, assessing its impact on health, housing, water and sanitation, safe environment, and adequate and effective remedy. He noted that despite the Government’s efforts to eliminate or mitigate the consequences of the incident, communities living in Devecser and Kolontár are still demanding reparations.

“In this regard, I am satisfied to note that judicial proceedings brought by affected communities against the company responsible for the reservoir are currently undergoing,” Mr. Georgescu said.

Since the incident, Hungary has modified laws, regulations and policies, but Mr. Georgescu stressed that more needs to be done including the strengthening of the Directorate for Disaster Management to have greater enforcement jurisdiction over the industries it now sees.

“Hungary offers a test case of lessons learned, of gaps turned into opportunity. It is of the utmost importance that Hungary continues monitoring the state of the environment and the health of populations that are in close proximity to facilities that produce or use hazardous substances,” the expert said.

He added, “Highly polluting industries and companies, in particular, must be held more accountable for their conduct in the infringement of the fundamental rights of innocent populations in areas where they operate.”

Mr. Georgescu said he received concerns about metallurgic plants in the northern part of the country that are operating in close proximity to the population, as well as recycling plants that are emitting hazardous fumes, contrary to licensing agreements.

“I raised these concerns with the Government during my visit and am pleased to share that it committed to looking further at these reports,” he said.

During his eight-day visit, Mr. Georgescu also held meetings with a wide range of stakeholders, including Government officials and civil society organizations, and visited communities in Kolontár and Devecser.

Independent experts, or special rapporteurs like Mr. Georgescu, are appointed by the Geneva-based UN Human Rights Council to examine and report back, in an unpaid capacity, on specific human rights themes. Mr. Georgescu is scheduled to present his conclusions and recommendations to the Council in September next year. 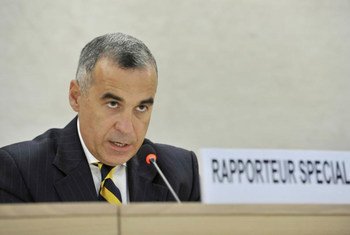 30 March 2012
A “durable solution” has yet to be found to the displacement of communities affected by nuclear testing more than sixty years ago in the Marshall Islands, a United Nations independent expert warned today.