10 October 2012
South Africa’s carbon footprint for 2010, the year it hosted the football World Cup, was lower than previously expected, says a new United Nations report, which highlights the successes and lessons that other countries must learn to ensure the sustainability of major international sporting events.

The report, produced by the UN Environment Programme (UNEP), shows that South Africa’s 2010 carbon footprint was 1.65 million tons of carbon dioxide equivalent, just 60 per cent of the figure that had been initially projected. This was partly due to fewer visitors than expected, carpooling and park and ride schemes, cutting energy use by 30 per cent, and using solar-powered technology and renewable energy.

The South African Government and UNEP also worked on a project to promote initiatives that would cut the tournament’s carbon footprint such as reducing waste and water use and enhancing biodiversity. In a news release, UNEP said such initiatives must be advanced in Brazil, which will be the host of the 2014 World Cup and the 2016 Summer Olympics.

Other successful measures taken during the 2010 World Cup highlighted in the report, which was released on Tuesday, include the improvement of South Africa’s transportation system, which included a rapid bus network, cycling paths, and walkways in major sites, the reuse of demolition waste, energy efficient lighting and reducing water waste in various stadiums.

While there were successful initiatives, UNEP said that there were many lessons learned in terms of implementing sustainability measures.

“The report points to many great initiatives, but perhaps the most important finding is that South Africa could have achieved more if sustainability measures had been brought in sooner rather than later,” said UNEP Executive Director Achim Steiner. “Indeed, it underlines that achieving the full potential of greening such tournaments is likely if sustainability is factored into the planning, design and construction from the word go.”

Earlier this week, UNEP officials met with representatives from the Brazilian Government, the International Federation of Association Football (FIFA) and the Olympic Committee to consider concrete steps to green the two major sporting events.

In its report, UNEP calls on FIFA to help raise awareness of the World Cup’s environmental impact by offsetting its own carbon footprint and encouraging its partners to do the same. UNEP has also signed an agreement with the Brazilian Government to help green both the World Cup and the Summer Olympics, carrying on an advisory role with the Olympic Games that began in 2004. 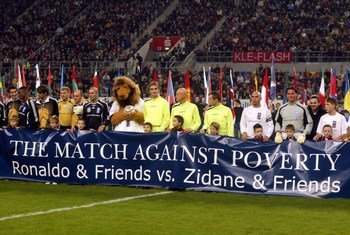