Secretary-General Ban Ki-moon said he remained deeply concerned over the security and humanitarian situations in eastern Democratic Republic of the Congo (DRC), and called for “continued and sustained high-level dialogue” to bring peace to the region.

In a message to the Summit of the International Conference on the Great Lakes Region (ICGLR), held yesterday in Kampala, Uganda, Mr. Ban condemned violence and serious human rights violations against civilians by the rebel March 23 Movement (M23) and other armed entities in eastern DRC, adding that the abuses should be thoroughly investigated.

“The M23, [which] has recently made advances northwards from its positions in [DRC’s eastern province of] North Kivu, is continuing destabilizing activities in areas that it occupies, and is perpetrating serious human rights violations, including child recruitment and sexual violence,” said Mr. Ban’s message, which was distributed to delegates at the meeting.

“Furthermore, other armed groups have stepped up their activities. Over 260,000 people have been displaced in North Kivu alone in the past several months, while over 60,000 additional Congolese have crossed into Rwanda and Uganda.”

Mr. Ban said that all support to the M23 and other armed groups must “cease immediately and permanently.”

But as he warned that the deteriorating security situation in eastern DRC threatened the stability in the wider Great Lakes region, he also stressed that it was “vitally important” for regional and international peace and security to uphold the territorial integrity and sovereignty of UN Member States. Such a principle was an “inviolable principle and cornerstone of international law.”

Mr. Ban called for “concerted efforts” by all concerned national, regional and international actors to seek a path to peace.

“I strongly encourage continued and sustained high-level dialogue at the bilateral and regional level aimed at restoring mutual trust and political will to address underlying causes of the conflict,” he stated.

The Secretary-General offered his “good offices, when and if appropriate,” to help find a peaceful solution to the region’s troubles.

He also said he looked forward to the outcomes of discussions on the proposed international neutral force to be deployed along the DRC-Rwanda border, which will be informed by the report of the ICGLR’s Military Assessment Team.

“Clarity on the concept and operational modalities of such a force, as well as its coordination with MONUSCO will be important,” he said, referring to the peacekeeping operation known as the UN Organization Stabilization Mission in DRC.

Mr. Ban also welcomed the recent progress in strengthening confidence-building measures, and cited the launching on 14 September in Goma of the expanded Joint Verification Mechanism (JVM).

First discussed in June, the mechanism is a technical body, comprising experts from both DRC and Rwanda and those of the UN and African Union, to address DRC-Rwanda border security issues.

“The United Nations, through MONUSCO, is supporting the work of the JVM and of the Joint Intelligence Fusion Centre in Goma, and strongly encourages close cooperation between the partners for their full and effective implementation,” Mr. Ban said. 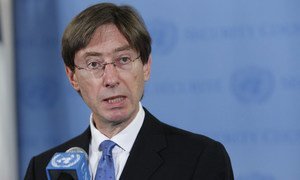 The Security Council today lauded the agreements reached by the leaders of Sudan and South Sudan in the Ethiopian capital, Addis Ababa, on Thursday as a “major breakthrough” for peace.