The United Nations today praised the “historic” work done by the Special Court for Sierra Leone (SCSL) to prosecute sexual and gender-based crimes committed during conflicts, and called for increased support for the Court’s work from the international community.

“War harms women in multiple ways. From mass rapes to mass displacements, women are on the frontlines of conflict and they are demanding justice. This includes effective prosecutions of war crimes and adequate redress for women,” said Michelle Bachelet, the Executive Director of the UN Entity for Gender Equality and the Empowerment of Women (UN Women).

“The Special Court for Sierra Leone has served justice and contributed to peace consolidation and reconciliation within a country destroyed by a devastating civil war […] It is now essential that the Court be given the means to complete its mandate and to document and share lessons learned in strengthening women’s access to justice,” she said.

The SCSL is an independent tribunal set up jointly by the Government of Sierra Leone and the UN. It is mandated to try those who bear the greatest responsibility for serious violations of international humanitarian law and Sierra Leonean law committed in the country since 30 November 1996.

In May, the Court sentenced former Liberian President Charles Taylor to 50 years in prison for planning and for aiding and abetting crimes committed by Sierra Leonean rebel forces during the country’s civil war. Mr. Taylor was found guilty of acts of terrorism, murder, rape, sexual slavery and enlisting child soldiers, among other charges.

The Court’s work “represents a critical landmark for international justice in prosecuting sexual and gender-based crimes committed during conflicts,” UN Women said in a news release, adding that the Court’s jurisprudence played an essential role in advancing recognition in law of such crimes.

During a press briefing at UN Headquarters in New York, Ms. Bachelet also highlighted that the Court has laid the foundation in international humanitarian law, for the recognition of acts such as forced marriages as crimes against humanity.

The SCSL is currently completing the trial phase of its mandate, with operational funding secured only through the end of November. The Court’s leadership addressed the Security Council today, calling for increased funds and support from the international community to establish a Residual Special Court.

“The Court continues to face crucial funding gaps very critical to the completion of its judicial mandate and its residual mechanism,” the Deputy Minister for Foreign Affairs and International Cooperation of Sierra Leone, Ebun A. Jusu, said during the meeting.

The Court also faces other challenges including not having enough staff, establishing communication with hundreds of witnesses in a safe environment, and developing indictments when there have been a multitude of crimes across a wide geographical area, said the Court’s Prosecutor, Brenda J. Hollis.

“We must keep in mind how fragile our accomplishment will be if we fail to keep faith with the people in the region who put their trust in you and in us,” the Court’s President, Shireen Avis Fisher, told the Council. “Our responsibility to these people will not cease. It must be taken up and advanced by the Residual Special Court of Sierra Leone.”

In a presidential statement, the Council reiterated its strong support for the SCSL and praised the progress it has achieved in bringing stability to the country and bringing an end to impunity. The Council also urged the international community to continue to support the Court as it moves into its final stage of work.

“The Security Council emphasized the vital need for further pledges of voluntary contributions in order to allow the Special Court to complete its mandate in a timely manner,” said Ambassador Gert Rosenthal of Guatemala, which holds the Council’s Presidency this month.

The 15-member body also recognized the need to address residual matters after the closure of the Court and welcomed the Agreement between the UN and Sierra Leone’s Government on the Establishment of a Residual Special Court. 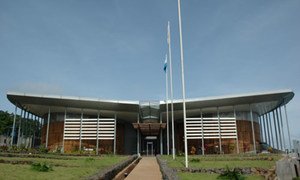