The Special Rapporteur on the human rights of migrants, François Crépeau, made six recommendations to the Italian Government after having spent nine days in the country meeting with Government representatives, civil society and international organizations, as well as many migrants.

His recommendations address Italy’s management of the European Union’s (EU) external borders, ranging from agreements with Libya and other neighbours, to full access by international organizations to migrants, as well as improving appeal systems to challenge expulsions.

Italy must ensure that “migration cooperation with Libya does not lead to any migrant being returned to Libyan shores against their will, either by Italian authorities, or by Libyan authorities with the technical or logistical support of their Italian counterparts,” Mr. Crépeau said, adding that bilateral re-admission agreements between Italy and its neighbours must have human rights at their core.

Mr. Crépeau also stressed that Italy must guarantee the full access by international organizations, civil society organizations and lawyers to areas where migrants are held or detained, noting that, currently, organizations such as the Office of the UN High Commissioner for Refugees (UNHCR) and the International Committee of the Red Cross do not have full access to all detention centres where migrants, many of whom are of Tunisian and Egyptian origin, are held for quick processing and removal.

Other recommendations by the independent expert include the development of a national framework based on human rights to organize and manage all migration centres, a “simpler and fairer appeal system for expulsion and detention,” and a speedier identification system of foreign inmates to ensure the detention of migrants for identification is limited to the shortest possible time, with a maximum of six months.

In addition, Mr. Crépeau warned against so-called ‘push-backs’ to countries that are not considered safe for asylum seekers.

“In light of the decision of M.S.S. v Greece, in which the European Court of Human Rights held that Greece was not a safe country of return for asylum seekers, and given the testimony I heard from migrants who transited through Greece regarding extreme xenophobic violence against migrants, Italy should formally prohibit the practice of informal automatic ‘push-backs’ to Greece,” Mr. Crépeau said.

During his mission, Mr. Crépeau visited three centres of identification and expulsion in Trapani, Bari and Rome. Earlier this year, he visited Brussels, Vienna, Tunisia and Turkey as part of a yearlong study on the management of the EU’s external borders. He will also visit Greece in November.

Independent experts, or special rapporteurs, are appointed by the Geneva-based UN Human Rights Council to examine and report back, in an unpaid capacity, on specific human rights themes. Mr. Crépeau is scheduled to present the results of his study to the Council in June next year.

Migration could escalate as globalization fails to put jobs where needed, UN says 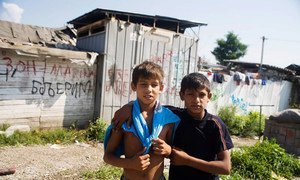 A group of independent United Nations human rights experts today urged the French Government to ensure compliance with international non-discrimination standards when it comes to the dismantling of Roma settlements and the expulsion of migrant Roma.