UNOWA
Karin Landgren, Special Representative of the Secretary-General for Liberia.

8 October 2012
The critical role of cooperation at local, regional and international levels in addressing the numerous peace and security problems in West Africa was highlighted today at a meeting of the heads of United Nations peace missions in the region.

The meeting in Dakar, Senegal – the 24th of its kind – was aimed at providing an exchange of views on peace and security challenges on issues ranging from the situation in the Sahel to piracy in the Gulf of Guinea.

In addition to the Secretary-General’s Special Representative and head of the Dakar-based UN Office for West Africa (UNOWA), Said Djinnit, who also chaired the meeting, it was attended by Bert Koenders of the UN Operation in Côte d’Ivoire (UNOCI), Joseph Mutaboba of the UN Integrated Peace-Building Office in Guinea-Bissau (UNIOGBIS), and the newly appointed Karin Landgren of the UN Mission in Liberia (UNMIL) and Jens Anders Toyberg-Frandzen of the UN Integrated Peace-Building Office in Sierra Leone (UNIPSIL).

Amidst the discussion on the world body’s progress in promoting peace and stability across the region, according to a news release from UNOWA, the UN officials gave particular attention to Côte d’Ivoire, which has recently experienced cross-border issues with neighbouring Liberia.

The border between the two countries has been volatile over the past few months following incidents in which heavily armed militiamen crossed the frontier and attacked Ivorian villages, as well as UN peacekeepers stationed in the area. In July, seven UN peacekeepers from Niger lost their lives in an attack by armed elements, while last month at least 18 people were killed in Ivorian border towns.

With the trans-border situation arousing particular concern, the UN officials noted that UNOCI and UNMIL continued to work to strengthen their inter-mission cooperation along the shared border, while also fostering dialogue between the Governments of Liberia and Côte d’Ivoire to develop a shared border strategy.

Turning to the situation in Mali, the Heads of Missions welcomed the recent progress made by Malian authorities in better articulating their demands regarding the security and humanitarian threats facing their country’s north, where Islamist militants and lingering food insecurity have created an unstable environment.

Furthermore, they applauded the convening by Secretary-General Ban Ki-moon of a high-level meeting on the Sahel during the recent General Debate of the General Assembly. It contributed, they said, to raising awareness on the challenges affecting the region while prompting greater international concern over the Sahel’s pressing and longer term needs.

Regarding Guinea-Bissau, the Heads of Missions commended recent advocacy and mediation efforts spearheaded by the UN and the African Union aimed at reviving dialogue between the country’s political players. They also encouraged further efforts to be pursued to ensure an inclusive transition process following the unconstitutional changes of power that occurred in the country.

Soldiers in Guinea-Bissau, which has a history of coups, misrule and political instability since it gained independence from Portugal in 1974, seized power on 12 April. The coup came ahead of a presidential run-off election that was slated for 22 April – and prompted calls from the international community for the return to civilian rule and the restoration of constitutional order.

Addressing the electoral situation in Sierra-Leone, the UN officials highlighted the importance of the upcoming presidential, parliamentary, and local elections, scheduled for 17 November, in advancing the country’s progress towards full representative democracy. They expressed their full support for UNIPSIL in assisting national and local efforts at promoting dialogue and ensuring the free, fair and violence-free holding of the elections. 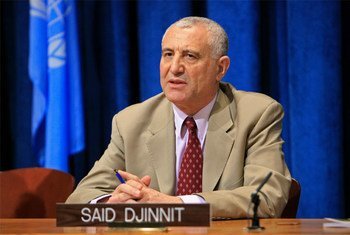 12 July 2012
While significant progress has been made over the past years in promoting and consolidating peace in West Africa, the continued attention and support of the United Nations remains critical, according to the world body’s top envoy for the region.