Secretary-General Ban Ki-moon today urged governments – in particular those undergoing transitions in North Africa and the Middle East – to meet the demands of their people and promote economic and social development.

“I have consistently urged leaders to stop flouting human rights and start meeting the legitimate demands of their people,” Mr. Ban said in his keynote address to the World Forum for Democracy in Strasbourg, France.

“This is my message to leaders around the world, from President Assad of Syria to others who must listen to their citizens before it is too late,” he added.

According to the website of the event’s organizers, the Council of Europe, the Strasbourg World Forum for Democracy brings together reformers and global leaders to identify democratic responses to the economic, social and political challenges which affect societies today.

In his speech, Mr. Ban noted that the case of Syria shows how the current democratic transitions have given life to hope and many changes, but have also generated uncertainty and fear. “Success is not guaranteed. It takes time to build democracy. But we must join forces to nurture progress until democracy takes a firm root in all countries around the world,” he said.

More than 18,000 people, mostly civilians, have died since the uprising against President Bashar al-Assad began some 18 months ago. Amidst an escalation in violence over recent weeks, UN agencies now estimate that some 2.5 million Syrians are in urgent need of humanitarian assistance.

“The recent escalation of the conflict along Syrian-Turkish border and the impact of the crisis on Lebanon are extremely dangerous,” Mr. Ban said referring to shelling incidents that took place between the two countries last week. “They show that this is a regional calamity with global ramifications.”

While the situation in Syria has worsened, putting at risk the stability of its neighbours and the entire region, it is still possible to find a political solution to the crisis, the UN chief stated, stressing that militarization only aggravates the situation and puts civilians in danger.

“I call on those who have influence over any side in Syria to exert it to promote a political solution, and empower political leaders, not armed groups or the regime’s military. Our goal is to create the appropriate conditions for a credible political transition that meets the legitimate aspirations of the Syrian people, and ensure their equal rights and human dignity,” Mr. Ban said.

The Secretary-General reminded the Forum that UN Member States have “clearly defined democracy as a universal value,” and stressed that they must make sure that nations live up to their obligations under international law.

In addition, he stated that democracy is not just about giving citizens a voice, but also about advancing their economic and social development.

“That is why it is so critical to achieve the Millennium Development Goals (MDGs),” he said, referring to the eight anti-poverty targets which have a completion deadline of 2015. “There has been progress since the Goals were adopted a dozen years ago, but for the mothers of South Sudan and countless others around the world, we have to press for urgent action.”

The eight MDGs, agreed on by world leaders at a UN summit in 2000, set specific targets on poverty alleviation, education, gender equality, child and maternal health, environmental stability, HIV/AIDS reduction, and a global partnership for development, all by 2015.

The Secretary-General has put together a top-level panel advise on the global development agenda beyond the 2015 deadline. In addition its 23 members, the panel is co-chaired by President Susilo Bambang Yudhoyono of Indonesia, President Ellen Johnson Sirleaf of Liberia, and Prime Minister David Cameron of the United Kingdom.

“Their approach will be participatory. They are seeking the views of development experts and ordinary citizens around the world,” Mr. Ban told the audience in Strasbourg.

He added that the United Nations will also continue to foster democracy around the world, promote human rights and help countries make a smooth transition from insecurity to instability.

In addition, they discussed access to asylum and the situation of Roma and minorities in Europe, as well as developments in the Western Balkans.

UN Democracy Fund to begin second round of funding applications 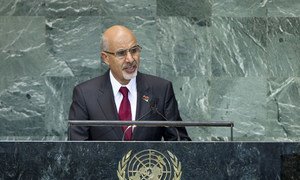 In his address to the United Nations General Assembly, the President of the General National Congress of Libya, Mohamed Yousef El-Magariaf, highlighted his country’s progress since the downfall of its former leader, Muammar al-Qadhafi, while also calling for the international community’s support in overcoming challenges it currently faces.