With its financial reserves at zero, the United Nations refugee agency is facing an “unprecedented” combination of crises, its top official warned today as he appealed to the international community to provide the necessary financial support.

The UN High Commissioner for Refugees, António Guterres, noted that his agency, known by the acronym UNHCR, is currently dealing with four acute crises as it tries to protect and assist 700,000 people who had fled conflict in Syria, Mali, Sudan and the Democratic Republic of Congo (DRC) by the end of September, on top of last year’s record exodus of 800,000 refugees worldwide.

“As a matter of fact, UNHCR is presently overstretched,” the UN refugee chief told reporters in Geneva, stressing that all the current problems come on top of dealing with long-standing chronic problems, such as one million Somali refugees who have fled conflict and drought in their homeland to Kenya, Ethiopia and Yemen.

Mr. Guterres was addressing a news briefing, following a meeting of UNHCR's governing Executive Committee, which meets in Geneva annually to review and approve the agency's programmes and budget, advise on international protection and discuss a wide range of other issues with UNHCR and its intergovernmental and non-governmental partners.

“At the present moment,” Mr. Guterres, “we deal with four simultaneous acute crises with the impact of last year’s very dramatic refugee situation and then with all the protracted problems that unfortunately are not yet able to find a solution from Afghans to Eritreans to the Colombia situation and Myanmar.”

To confront “these very dramatic circumstances,” the UN official called on all countries to keep borders open to provide adequate protection, and issued “a very strong appeal” for financial support for UNHCR’s operations worldwide.

“At this moment our reserves came to zero,” he said. “We have been able until to now to respond to all the emergencies, but this dramatic combination of new crises and chronic ones that do not end creates an enormous pressure over our resources, and we are badly needing international solidarity.”

Asked whether this was the worst crisis in UNHCR’s history, Mr. Guterres said what made it different this time is the number of simultaneous crises, noting that there were millions of refugees from Afghanistan and massive outflows from the DRC but these taking place one crisis at a time.

“What I don’t remember in the recent history of the UNHCR is four simultaneous acute crises as measured out for the refugees and other dramatic humanitarian problems together with the strong impact of unresolved problems that occurred in the near past, and this combination is indeed unprecedented in our recent history,” he added.

On the issue of the agency’s reserves, the UN refugee chief noted that current programmes were all funded.

“Of course if new things are needed that’s where we are now in great difficulties to respond and so when a pot is empty the only way to solve the problem is to fill it,” he stressed. “We are talking about contingencies for the future, so it’s not of any fixed amount; it’s the need to have marginal manoeuvre to respond to the new emergencies or the aggravation of present situations.”

“We are gearing up to be prepared for an escalation of conflict if that happens and an increase in the number of people going out,” Mr. Guterres said. “So this is indeed very much in the centre of our concerns, at the centre of the work we are doing with our partners to get ready for whatever happens.”

As possible contingency measures for financing, the UNHCR is considering cutbacks on non-core activities, such as training and travel, as well as potentially slowing down some processes like the return of refugees so that “in those acute situations when you have core needs and basic lifesaving requirements you do not fail,” he stressed.

Giving the latest breakdown of the current crises, Mr. Guterres noted that there 320,000 registered refugees from Syria as well as large numbers of internally displaced persons (IDPs), over 200,000 refugees from Mali as well as 300,000 IDPs, “an acute outflow” of some 200,000 Sudanese from South Kordofan and Blue Nile states into South Sudan and Ethiopia, and 60,000 people who have fled DRC into Uganda, Rwanda and Burundi. 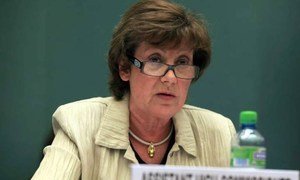 A senior United Nations official appealed today for strengthened political will to help the world’s more than 42 million refugees, asylum-seekers, internally displaced and stateless people, amid a recent rise in new humanitarian emergencies in Africa and the Middle East.