UNHCR/A. Branthwaite
An elderly Syrian woman becomes emotional when talking about Syria and her new life as a refugee in the Akcakale camp, southern Turkey.
3 October 2012

United Nations Secretary-General Ban Ki-moon expresses his deepest concern at the incident which has reportedly killed at least six Turkish civilians and gravely wounded others in the town of Akcakale near the Syrian border, according to his spokesperson.

“The Secretary-General has repeatedly warned that the ongoing militarization of the conflict in Syria is leading to tragic results for the Syrian people,” the spokesperson said today.

“Today’s incidents, where firing from Syria struck a Turkish town, again demonstrated how Syria’s conflict is threatening not only the security of the Syrian people but increasingly causing harm to its neighbours,” he added.

According to media reports earlier Wednesday, several people, including a child, were killed and others seriously wounded after mortar fire from Syria hit the town of Akcakale in Turkey’s Sanliurfa province, which shares a border with Syria.

“The Secretary-General extends his sincere condolences to the Government and people of Turkey over this tragic loss of life,” the UN chief’s spokesperson said.

Within the Middle Eastern country, more than 18,000 people, mostly civilians, have died since the uprising against the regime of President Bashar al-Assad began last year. A further 2.5 million Syrians urgently need humanitarian aid, according to UN estimates.

The spokesperson noted that Mr. Ban calls on the Syrian Government to respect fully the territorial integrity of its neighbours, as well as to end the violence against the Syrian people. “He calls on all parties to reduce tensions and to forge a path toward a peaceful resolution of the Syria crisis,” the spokesperson said.

Earlier today, the Secretary-General was contacted by telephone by Turkey’s Foreign Minister, Ahmet Davutoðlu. In addition to expressing his condolences at the “tragic loss of life” caused in the incident, Mr. Ban encouraged the Foreign Minister to keep open all channels of communication with the Syrian authorities with a view to lessening any tension that could build up as a result of the incident.

The spokesperson noted that the Foreign Minister had also spoken earlier to Joint Special Representative of the UN and the League of Arab States on the Syrian crisis, Lakhdar Brahimi. 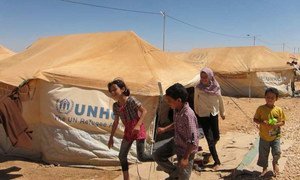 More than 300,000 Syrians have fled to neighbouring countries, the United Nations refugee agency said today, with numbers tripling over the past three months.