The Global Fund/Charlie Shoemaker
Morgester who works as a tailor in rural Zimbabwe is impressed by the Global Fund programme through which he receives antiretroviral treatment for AIDS.

2 October 2012
Zimbabwe is set to attain “universal” coverage for AIDS treatment thanks in part to an $84 million disbursement today by the United Nations-backed Global Fund to fight AIDS, Tuberculosis and Malaria.

The amount will cover costs for life-saving antiretroviral drugs (ARVs) to treat 10,000 new patients, the Global Fund announced in a news release. The funds will also finance a six-month ARV buffer stock to guard against treatment interruptions for some 480,000 patients in Zimbabwe.

Close to half a billion dollars will be distributed around the world as part of UN-supported efforts to respond to the global threat posed by HIV/AIDS, tuberculosis and malaria. Additional funding, approved last in August 2012, has met the need by expanding programmes in areas where demand has not yet been met.

The additional funds slated for the African country will aid the financing of treatment for 203,440 patients by the end of the year.

The Global Fund, a public-private partnership and international financing institution, was created in 2002 to scale up resources to fight three of the world’s most devastating diseases, and to direct those resources to areas of greatest need.

Together with increases in the number of patients receiving treatment from the US President’s Emergency Plan for AIDS Relief (PEPFAR), some 85 percent of adults in need of ARV treatment in Zimbabwe are projected to be covered in the coming months. This constitutes “universal” coverage – defined as occurring when at least 80 percent of the people in need have access to the required drugs.

The Global Fund’s latest disbursement was part of a grant announced in 2010, and renewed in June 2012, that focuses on prevention and treatment for youth, women, children and people living with HIV.

The Global Fund agreed to raise its coverage in tandem with PEPFAR, which has this year been increasing the number of patients it supports in Zimbabwe from 80,000 to 140,000. PEPFAR plans to finance the treatment of 160,000 adults and children in need next year.

Zimbabwe’s two other main sponsors of treatment, the Zimbabwean Government and the United Kingdom’s Department for International Development (DFID), respectively provide support to a further 124,000 patients and 35,900 patients.

In order to make sure the projected gains are realized and sustained, the Global Fund has pledged to continue to work closely with the Zimbabwean Government and other partners, including PEPFAR.

To date, it has approved funding of $22.9 billion for more than 1,000 programs in 151 countries, and helped programmes provide AIDS treatment for 3.6 million people, anti-tuberculosis treatment for 9.3 million people and 270 million insecticide-treated nets for the prevention of malaria. 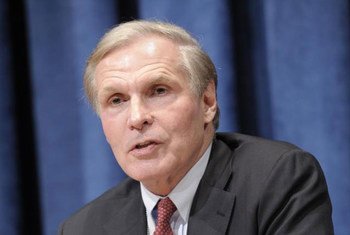 New campaign aims to give ‘Big Push’ in support of UN Every Woman, Every Child initiative

25 September 2012
The Global Fund to Fight AIDS, Tuberculosis and Malaria today launched ‘The Big Push,’ a campaign in support of the UN’s Every Woman Every Child initiative, which aims to raise public backing for global health goals that need support and funding to achieve success.