Addressing a news conference at UN Headquarters, Deputy Secretary-General Jan Eliasson said that this year’s General Debate demonstrated again the centrality of the world body in diplomacy, in setting global norms and in harnessing the power of partnerships for development.

Established in 1945 and providing a forum for multilateral discussion of the full spectrum of international issues covered by the UN Charter, the General Assembly occupies a central position as the world body's chief deliberative, policy-making and representative organ.

More than 100 heads of State or government and foreign ministers, as well as many ministers of finance, health, environment and development cooperation participated, in the Assembly’s General Debate, held from 25 September to 1 October.

Dozens of regional organizations, civil society groups, business leaders, philanthropists, goodwill ambassadors, messengers of peace and others came through the UN’s doors for various events held on the margins of the General Debate, on issues such as maternal and child health, nutrition, polio and nuclear terrorism. Over the course of the week, Secretary-General Ban Ki-moon had more than 150 meetings and attended 50 events.

“We had confirmation of the UN as a meeting place,” said Mr. Eliasson.

He highlighted progress on developing a comprehensive strategy to address the complex crisis in the Sahel region of West Africa, marked by political turmoil, extreme climatic conditions and fragile economies that have left some 18 million people at risk of food insecurity.

There were also new commitments for preventing nuclear terrorism, support for political transitions in Myanmar, Somalia and Yemen, and timely international backing for the agreement, signed on Thursday in Ethiopia, aimed at easing tensions between Sudan and South Sudan.

The impasse between the Israelis and the Palestinians, and the ongoing crisis in Syria featured prominently in meetings of the Secretary-General and the Deputy Secretary-General, as did the rule of law, which was the subject of a special high-level meeting held last Monday.

“We should never forget that we have still work to do on the present Millennium Development Goals. There are grave deficiencies in the achievement of these Goals,” said Mr. Eliasson, calling for “new energy” to achieve the targets.

A new initiative, Education First, was launched with the aim of getting 61 million children to school. On polio, the UN brought together major donors with the presidents of Afghanistan, Nigeria and Pakistan – the remaining countries where the disease is endemic – to mobilize for a final push to eradicate the disease once and for all. There were also discussions on establishing Sustainable Development Goals (SDGs) and a post-2015 development agenda.

The main part of the 67th session of the Assembly will continue through December, with delegates from the UN’s 193 Member States discussing issues relating to disarmament and international security; economics; social, humanitarian and cultural matters; decolonization; UN administration and budget; and legal issues. 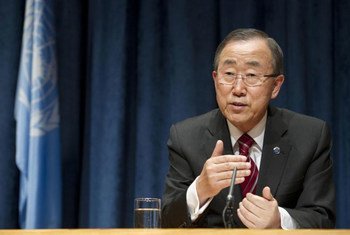 19 September 2012
World leaders will have a wide range of pressing global challenges to address as they convene at the United Nations next week, Secretary-General Ban Ki-moon said today, as he laid out the agenda for the General Assembly’s annual high-level debate.