1 October 2012
Caribbean ministers at the United Nations General Assembly today called on Member States to pay attention to the devastating effects of climate change on the world’s most vulnerable populations, and urged greater international cooperation to achieve a common UN-sponsored climate agreement.

Caribbean ministers at the United Nations General Assembly today called on Member States to pay attention to the devastating effects of climate change on the world’s most vulnerable populations, and urged greater international cooperation to achieve a common UN-sponsored climate agreement.

“Inaction or inadequate action is inexcusable and morally indefensible, given the level of certainty of the scientific evidence before us, and the technological and financial tools at our disposal to affect the necessary change,” the Minister of Foreign Affairs and Foreign Trade of Barbados, Maxine McClean, said in her remarks to the 67th Assembly’s General Debate, taking place at UN Headquarters in New York.

Noting that there was “no greater threat” to the survival, viability, and security of Barbados and other Small Island Developing States (SIDS) than the “potentially catastrophic” changes to the global climate system, Ms. McClean warned that although some progress had been made at last year’s Durban Climate Change Conference, the world remained far from finding a solution to the problem.

“Barbados welcomes the decision taken in Durban to launch negotiations on a new legally binding agreement that would take effect after 2020,” she continued. “However, for us a post-2020 agreement is meaningless if ambitious actions are not taken now to reduce global emissions and provide finance and technology to vulnerable developing countries.”

Grenada’s Permanent Representative to the UN, Dessima Williams, in her remarks to the Assembly, similarly noted the risks that Caribbean island nations faced due to climate-related events.

She urged Member States to support the UN’s impending Climate Change Conference in Doha, Qatar, also known as COP18, in an effort to move “steadfastly toward the finalization of a new binding climate treaty by 2015.”

“Without a legally binding climate regime to uphold environmental integrity, Caribbean and other small island states could lose the opportunity for achieving sustainability soon and some could even disappear,” Ms. Williams said. “We see the upcoming COP 18 in Doha, Qatar as an opportunity to move decisively away from this scenario.”

In his statement, Suriname’s Minister of Foreign Affairs, Winston G. Lackin, echoed this concern and recalled that the recent UN Sustainable Development Conference (Rio+20), which was held in Brazil in June, concluded without an agreement on the financing of sustainable development.

“The international community cannot abandon its obligation to provide the necessary means to combat serious consequences of over-consumption, pollution, and carbon emissions, which threaten to undo our own achievements in protecting the environment and securing the well-being of our peoples,” he said.

Touching upon climate-related issues in his address to the General Debate, Belize’s Foreign Minister, Wilfred P. Elrington, added that his country fully supported all regional initiatives tackling issues of common concern such as security, economic development and climate change.

“The impact of climate change on our region has been direct and devastating, compelling us to work with our CARICOM (Caribbean Community and Common Market) partners and with the wider Alliance of Small Island States to advance our interests in the climate change negotiation process,” Mr. Elrington told the gathered delegates.

Mr. Elrington, however, also noted the impact the transnational trafficking of weapons was having on the region and lamented what he said was a lack of consensus over a global response to the issue.

“Our region, Central America and the Caribbean, has been labelled among the most violent regions of the world, with homicide rates that have reached crisis levels,” the Foreign Minister stated.

He added, “It is therefore with deep regret that despite what appeared to be an emerging consensus and despite the underlying global urgency for a multilateral response the conclusion of an Arms Trade Treaty has so far been beyond the reach of the international community.”

On that note, Trinidad and Tobago’s Minister of Foreign Affairs, Winston Dookeran, warned that every moment of delay from fully implementing the UN Framework Convention on Climate Change (UNFCCC) was “a step closer to our own demise.”

Furthermore, Mr. Dookeran called on Member States to follow though on their obligations as stipulated by the Kyoto Protocol, suggesting that “this would guarantee the survival of those of us most vulnerable to climate change, climate variability, and sea level rise.”

He also weighed in on the transnational trafficking of weapons, agreeing with his Belizean counterpart that the high-incidence of gun-related crimes in the region had become “intolerable” and “an affront to efforts to resolve disputes by peaceful means.”

“We join with out CARICOM partners and others in the call for the resumption of negotiations for the Arms Trade Treaty by the first quarter of 2013,” he added.

Dominica’s Permanent Representative to the United Nations, Ambassador Vince Henderson, stressed that his island nation is committed to the foundational principle of environmental sustainability.

“The unsustainable consumption and production systems that continue to deplete the world's resources and simultaneously contribute to global warming, remains a major threat to the survival of those of us who live close to the world's oceans,” he said. “The very vulnerability of Dominica to the effects of global warming underscores our commitment to a multilateral approach aimed at combating climate change.”

Representing the Pacific island nation of Palau, on the other side of the world, the small nation’s Permanent Representative to the United Nations, Ambassador Stuart Beck, told the Assembly that Palau rejected the advice – contained in the International Panel on Climate Change's Report on Managing Risks – that SIDS policy-makers might, in certain cases, consider relocating populations.

“We assure you, Mr. President, that Palau has no intention to move our people,” Ambassador Beck said. “Our islands are our home. They are essence of our very being. We will pursue every legitimate recourse available to us before we concede hope.”

The officials from the small states are among scores of world leaders and other high-level officials who presented their views and comments on issues of individual, national and international relevance at the Assembly’s General Debate, which ends later on Monday. 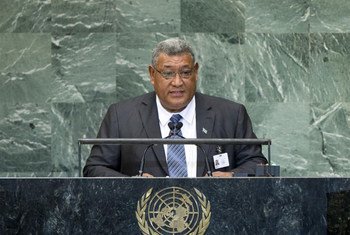 29 September 2012
In a call for greater international focus on the problems of developing small-island states, Tuvalu’s Minister of Foreign Affairs, Apisai Ielemia, today told the United Nations General Assembly that the time had come for special recognition of countries such as his.