“My country sees it as fundamental that international organizations support and promote all human rights,” Mr. Albuja said in his statement to the 67th Assembly’s General Debate, taking place at UN Headquarters in New York, adding that international and national instruments that regulate human rights and supervise their implementation must be discussed and updated regularly to strengthen international law.

“This profound commitment with humanity forces us to encourage tolerance, respect and support for every person,” he said. “Since people are at the centre of the Government’s Citizen Revolution programme, we have decidedly supported people that are persecuted for the political ideals, sexual orientation, religious beliefs, or that have a well-founded fear of integrity in their home countries.”

Ecuador currently has some 60,000 refugees, Mr. Albuja noted, the highest figures of any Latin American country. In addition, it is also home for some 500,000 economic migrants who have incorporated to society and are protected by the State.

The Ecuadorian official stressed that in addition to human rights, countries should recognize the rights of nature and focus on preserving and regenerating its vital cycles, structure and evolutionary processes.

“By recognizing [nature’s] rights, we close the integral cycle that these have with human rights,” he said, calling for a universal declaration on the rights of nature to ensure its protection,” he said.

Ecuador is one of the main promoters at an international level of sustainable measures for the environment, Mr. Albuja said, adding that the Government has put in place various measures to protect species and ecosystems in danger of extinction, reduce carbon emissions, and combat climate change.

He added that countries should work together to make progress on sustainable development but there needs to be a stronger will from governments as well as regional and international institutions to achieve this end.

Ecuador’s Vice Minister of Foreign Affairs is one of scores of world leaders and other high-level officials presenting their views and comments on issues of individual, national and international relevance at the Assembly’s General Debate, which ends later on Monday. 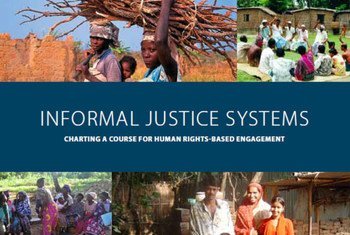 26 September 2012
Informal justice systems to resolve disputes must be integrated into broader development initiatives to guarantee the protection of human rights, since they are preferred by a large number of people in various developing countries, according to a United Nations study released today.