The crisis in Syria, terrorism and environmental degradation underscore the vital need for the United Nations, Costa Rica’s Foreign Minister, Enrique Castillo-Barrantes, told the General Assembly today, on the last day of its annual high-level debate.

“One year ago, we came to this Assembly encouraged by an echo of hope from North Africa and the Middle East,” the Foreign Minister said, referring to the Arab Spring that saw entrenched regimes ousted in popular uprisings in Tunisia, Libya and Egypt, and noting that the “hopeful clamour” still persists in the complex transition to democracy.

“Today, however, the sound most strongly resonating in this hall is the desperate scream of women and children in Syria,” he added, citing the uprising against President Bashar al-Assad, in which more than 18,000 people have been killed over the past 19 months, among a range of global issues of concern which included the resurgence of territorial conflicts, the rhetoric of war among some states, terrorism, drug, trafficking, organized crime and environmental deterioration.

“These challenges alert us to many dangers. However, they also reiterate the seminal importance of this Organization and of the multilateral system,” he stated, noting that the Central American region was particularly impacted by the onslaught of drug trafficking and international organized crime.

“Costa Rica considers it necessary to develop a more active link between the United Nations and the design and implementation of well-balanced strategies towards the drug trade,” Mr. Castillo-Barrantes said, calling for UN reform, including expanding the 15-member Security Council and improving its working methods.

“It is necessary, moreover, that drug traffickers be viewed as a real threat to peace and international security.”

He noted that environmental, social and economic vulnerabilities are among the reasons why middle income countries, like Costa Rica, still need the support of the international community to consolidate improvements in economic conditions and human development.

“Let's not forget that our achievements are due, in part, to the proper use of cooperation,” he said. “To eliminate it because it has been well used would be a fatal contradiction.”

The Costa Rican Foreign Minister is one of scores of world leaders and other high-level officials presenting their views and comments on issues of individual, national and international relevance at the Assembly’s General Debate, which ends later on Monday. 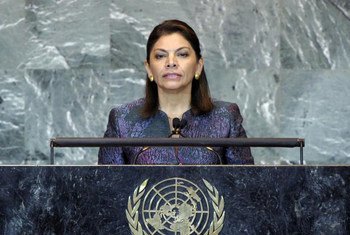 23 September 2011
Costa Rica and El Salvador, two countries highly affected by drug-related violence in recent years, have urged the United Nations to help fight drug cartels and organized crime, and called on Member States with high numbers of drug consumers to take the lead on the issue.