1 October 2012
Speaking on the last day of General Assembly’s high-level debate, a range of African leaders and government officials today called for greater United Nations help in combating the twin scourges of war and poverty, at the same time seeking greater representation for Africa on the Security Council.

Speaking on the last day of General Assembly’s high-level debate, a range of African government officials today called for greater United Nations help in combating the twin scourges of war and poverty, at the same time seeking greater representation for Africa on the Security Council.

“Since 1945 the essential rules governing the workings of the UN Security Council are literally frozen in a paralysis that is becoming more and more repulsive,” Togo’s Minister of Foreign Affairs, Elliot Ohin, told the 67th Assembly’s General Debate, which tends today at UN Headquarters in New York.

“The inability of the Security Council to agree on certain issues of great importance is a perfect illustration of this and renders reform of this body at the heart of UN action yet more urgent,” he said, calling for total and immediate action, including giving Africa adequate representation.

Eritrea’s Foreign Minister, Osman Saleh, said it is clear that the UN has not succeeded in its paramount purpose of saving humanity from the scourges of war and poverty, and now the threat of global climate change, in the 67 years since its creation.

“What is particularly significant is the fact that in most of these wars, it is some of the big powers, who have been the main architects and actors in these wars – the same powers who by virtue of their position in the United Nations Security Council should have shouldered the biggest responsibility for the maintenance of peace and stability,” he said.

“The United Nations system, as has been repeatedly pointed out, is indeed outdated. The General Assembly has been emasculated. The Security Council is dominated by one powerful permanent member and increasingly becoming paralyzed,” he added.

“No part of the world is in need of positive change as the African continent, which remains marginalized and almost voiceless,” Mr. Saleh stated, while also calling on the international community to assist Mali in recovering its territorial integrity after Islamic militants seized control of the north of the country, imposing strict Sharia law and sending 260,000 refuges fleeing into neighbouring countries.

Foreign Minister Basile Ikouebe of the Republic of Congo.

In his speech to the General Debate, the Foreign Minister of the Republic of Congo, Basile Ikouebe, also cited the crisis in Mali, warning that the terrorist groups in the north of that country threaten peace, security and stability in the whole of the sub-Saharan Sahel region.

He noted that the worsening humanitarian situation together with the risk that the terrorist contagion may spread makes it imperative that the Economic Community of West Africa (ECOWAS), with the support of the African Union and the UN, ensure that in future the dangerous precedent does not repeat itself.

Mr. Ikouebe cited other crises such as the bloody uprising in Syria, the Middle East conflict and the violence in the eastern Democratic Republic of Congo, while stressing Africa’s vulnerability to the global economic crisis.

“Faced with this situation, my delegation reaffirms the responsibility and central role of the UN in forging the spirit of solidarity and cooperation needed to ensure that the pledges already made for development aid and financing are kept,” he said.

In his remarks, Djibouti’s Foreign Minister, Mahamoud Ali Youssouf, noted that the global economic and financial situation remains more worrying than ever.

“It is therefore important that the fate of the least developed African countries be examined with renewed attention to help them lessen the burden, improve their productive capacities and facilitate the access of their products to world markets on favourable conditions,” he said.

He called for the mobilization of a donors’ conference to help restore Somalia’s economy following progress in setting up a new government and recovering territory in a country that has been riven by ferocious factional fighting for the past two decades.

In his statement, Foreign Minister Joseph Bandabla Dauda of Sierra Leone – often cited as a success story in UN efforts to consolidate peace in countries that have been ravaged by conflict – vowed to continue to wholeheartedly embrace mediation and other conflict prevention initiatives as a key and indispensable tool in settling disputes, preventing and resolving conflicts.

“The use of preventive diplomacy in the maintenance of international peace and security was, until quite recently, not the strongest point of the UN system,” Foreign Minister Dauda said. “Rather, it was used more as a tool in crisis management. I am however heartened by the present impetus.”

Sierra Leone, recovering from a decade of civil war that ended in 2002, was the first country, together with Burundi, to be put on the agenda of the UN Peacebuilding Commission when it was set up in 2006 to prevent post-conflict countries from relapsing back into bloodshed.

Botswana’s Foreign Minister, Phandu Skelemani, in his address to the Assembly, highlighted the adverse effect the global economic crisis had had on the southern African country, forcing it to delay development projects.

“We continue to be concerned that many of our traditional donors who helped to bring us to where we are today have virtually abandoned us following our graduation to Higher Middle Income developing country status,” the Foreign Minister said.

He added, “Contrary to the perception that Botswana is an economically well-off country, we do need development assistance now, more than ever before, on account of the varied nature and gravity of the challenges we continue to face.”

Among world crises, Mr. Skelemani cited Mali, and particularly Syria, where he said President Bashar al-Assad has displaced more than a million Syrians to satisfy his lust for power, causing some 300,000 Syrians to flee into neighbouring countries and slaughtering 20,000.

“And yet Syria remains a member of the UN, a body with the expressed objective to defend humanity. This surely cannot be right. Syria’s allies in the Security Council and in the region need to be equally condemned,” he said.

“My delegation condemns in the strongest terms possible, the persistent veto action by China and Russia of successive Security Council resolutions aimed at putting pressure on the Syrian leadership to cease its heinous crimes against its own citizens,” he continued. “We therefore call upon such Members of the Security Council to live up to their responsibilities in accordance with the provisions of the UN Charter.”

Foreign Minister Skelemani called on the Council to assume the high moral ground in defence of victims of war crimes and crimes against humanity, such as the ones currently being committed in Syria, adding: “We urge the international community to act swiftly to save the people of Syria from further unwarranted bloodshed.”

In his statement to the Assembly, Angola’s Permanent Representative to the United Nations, Ambassador Ismael Gaspar Martins, also cited the major crises around the world, including Mali and Syria, the effects of the global economic crisis, and the need to reform the 15-member Security Council.

“The Security Council plays a preeminent role in the prevention and resolution of conflicts and in the maintenance of peace,” Ambassador Martins told the gathering. “The central theme, the objective of our debate, brings before us the necessity to reform the Security Council and the imperative for an equitable representation of all regions of the world, thus adapting it to contemporary reality.”

The African officials are among scores of world leaders and other high-level officials presenting their views and comments on issues of individual, national and international relevance at the Assembly’s General Debate, which ends later on Monday. 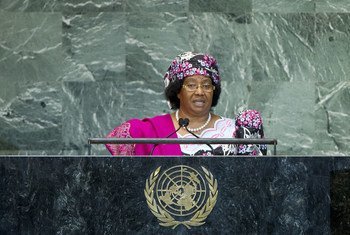