1 October 2012
A new United Nations report released today calls on governments to address the needs of older persons, who are now the fastest growing population segment worldwide, stressing that they will require adequate policies, strategies and laws to ensure their well-being.

“Rapid population ageing and a steady increase in human longevity worldwide represent one of the greatest social, economic and political transformations of our time,” said Secretary-General Ban Ki-moon in his message to mark the International Day of Older Persons, which coincided with the report’s release.

“These demographic changes will affect every community, family and person. They demand that we rethink how individuals live, work, plan and learn throughout their lifetimes, and that we re-invent how societies manage themselves.”

By 2050, 80 per cent of the world’s older people will live in developing countries and the population over 60 years old will be larger than the population under 15, according to the UN Population Fund (UNFPA).

The report, Ageing in the Twenty-first Century: A Celebration and a Challenge, which was produced by UNFPA and HelpAge International, underlines that while the trend of ageing societies is a cause for celebration, it also presents huge challenges as it requires new approaches to health care, retirement, living arrangements and intergenerational relations.

“People everywhere must age with dignity and security, enjoying life through the full realization of all human rights and fundamental freedoms,” UNFPA Executive Director Babatunde Osotimehin said at the report’s launch in Tokyo, Japan.

“Longer life expectancy was a goal of the Cairo International Conference on Population and Development in 1994. More action needs to be taken to achieve this for all people; new poverty goals must not exclude older people.”

Governments need to put policies and practices in place to support their current older populations and prepare for 2050, the report says, noting that more than 100 countries are already taking steps in this direction by implementing non-contributory social pensions in recognition of old age poverty. However, this is only part of what is required to ensure the rights of older persons are protected.

The report notes that despite their social and economic contributions to society, many older persons all over the world face continued discrimination, abuse and violence, and underscores the need for governments, civil society and the general public to work together to end these destructive practices and invest in older people.

The report also includes the stories of 1,300 older men and women who participated in group discussions in 36 countries around the world. Their first-hand accounts and testimonies supported efforts to better understand and meet their needs, UNFPA said in a news release.

“Ageing is a lifelong process that does not start at age 60. Today’s young people will be part of the two billion-strong population of older persons in 2050,” said Dr. Osotimehin. “This report shows that, with actions taken now, we can all benefit from the longevity dividend – increasingly in the developing world – now and in the future.” 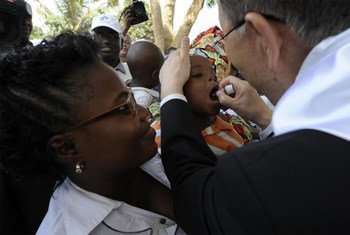 26 September 2012
The United Nations today presented a plan to make life-saving health supplies more accessible, while a new report found that, despite impressive reductions in maternal and child mortality in the past decade in some countries, millions of women and children still die every year from preventable causes.