The current patent wars around the world underline the need for an international system that provides an even playing field for actors and supports innovation in line with current economic and technological realities, the United Nations World Intellectual Property Organization (WIPO) said today.

“The position of IP [intellectual property] as a battleground for intense competition reinforces the need for a rules-based international system,” WIPO Director General Francis Gurry told delegates at the opening of the agency’s annual meeting in Geneva.

“Rules should provide an even playing field and should save us from the temptation to lapse into forms of technological protectionism or mercantilism.”

Mr. Gurry said there is an increasing demand for WIPO’s services, which reflects the growing consensus around the world that innovation is the foundation for economic success. As an example, he cited increasing levels of investment in research and development and the adoption of strategies by all the major economies to improve their innovation ecosystems.

“While many parts of a successful innovation ecosystem, such as a good education system, lie beyond the competence of WIPO, IP is an essential part of such an innovation ecosystem. IP captures the economic value of innovation. It provides a secure environment for taking an idea through the complex journey to market commercialization,” he said.

In addition, he noted that a greater international approach to patenting comes as a result of increased market globalization. This new environment, he said, requires WIPO to respond in new ways to ensure effective capacity building in developing and least developed countries.

Mr. Gurry said that progress has been made in the ongoing discussions on an international instrument on IP and genetic resources, traditional knowledge and traditional cultural expressions, which he said is “a major priority” for the agency. However, he said that, despite the progress made over the past two years, more needs to be done and he encouraged countries to work towards a positive outcome during the meeting, which will end on 9 October.

Mr. Gurry also praised the “constructive spirit” that led to the recent adoption of the Beijing Treaty on Audiovisual Performances in June, which protects the intellectual property rights of audiovisual performers, such as film and TV actors, and said he hoped that this would carry over in other ongoing negotiations. In particular, he called on States to endorse a proposed roadmap for a new instrument on improving access to published works for the visually impaired and print-disabled.

During the meeting, Mr. Gurry also presented a report on WIPO’s main achievements over the past year.

♦ Receive daily updates directly in your inbox - Subscribe here to a topic.
♦ Download the UN News app for your iOS or Android devices.
innovation 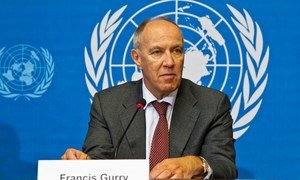