In a speech to the United Nations General Assembly, the Foreign Minister of Uzbekistan, Abdulaziz Kamilov, today underlined the commitment of his country - a landlocked nation in Central Asia – to a United Nations convention protecting water resources in his water-scarce region as part of a larger effort to ensure regional peace and stability.

“In the modern world, given climate change and the worsening ecological situation on a global scale, ensuring reasonable and rational use of water resources becomes the most acute problem,” Mr. Kamilov told the 67th Assembly on the fourth day of its annual General Debate, at UN Headquarters in New York.

A report released last year by the UN Environment Programme (UNEP) noted how boosting cooperation between countries sharing the waters of the Amu Darya, Central Asia’s longest river, could be key to the future peace and security of the region and urged the four main nations involved – Afghanistan, Tajikistan, Turkmenistan and Uzbekistan – to ratify the Convention on the Protection and Use of Transboundary Watercourses and International Lakes.

The report further notes that water resources in the region are already depleted by decades of often-unsustainable development dating back to the Soviet era, when large-scale engineering projects diverted flows from the river into cotton, wheat and fodder farming in arid and desert regions.

In reference to plans by neighbouring Tajikistan to build a major dam – the Rogun hydropower station – Mr. Kamilov urged that the region’s limited water resources be used “first, to meet potable and sanitary needs, and only after that to ensure food security, ecological needs and the needs of industry.”

In addition, he stressed that all construction projects of hydropower facilities in the upper stream basins of the Syr Darya and Amu Darya rivers be subjected to international authoritative appraisal under UN auspices, and be in line with the Convention.

Located on the Vakhsh River in the country’s south, the Rogun project has reportedly caused some regional tensions. According to media reports, Uzbekistan has opposed construction on the basis that it will negatively impact the region’s environment, as well as adversely impact its agricultural sector.

The Uzbek Foreign Minister is one of scores of world leaders and other high-level officials presenting their views and comments on issues of individual national and international relevance at the Assembly’s General Debate, which ends on 1 October. 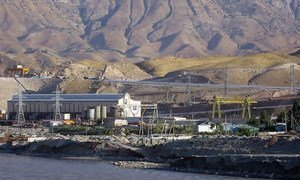 Secretary-General Ban Ki-moon today voiced his support for the World Bank’s efforts to help Tajikistan address its energy challenges, and its decision to continue with the independent, technical assessment of the proposed Roghun hydropower project.