Somalia’s well-being rests significantly on its large youth population, according to a United Nations report released today, which stressed the importance of empowering this segment of the country to spur economic, political and social growth in the country.

“As witnessed in the Arab region and elsewhere, young people can serve as potent drivers of political, social and economic transformation,” said Sima Bahous, the UN Development Programme (UNDP) Regional Director for the Arab States, at the launch of the report. “We can no longer afford to overlook the potential gains from placing youth at the centre of Somalia’s development.”

Over 70 per cent of Somalia’s population is under the age of 30. The Somalia Human Development Report 2012: Empowering youth for peace and development, reveals that although the majority of Somali youth believe they have a right to be educated and a right to decent work, they feel disempowered by multiple structural barriers built into the family, institutions, local government and society, creating in them a high level of frustration.

“What young Somalis really want is a different future for themselves, one in which they can make a decent living in peace, and weigh in on the decisions that affect their lives,” said UNDP’s Resident Representative in Somalia, Mark Bowden, adding that two-thirds of Somalia’s youth are unemployed – one of the highest rates of joblessness in the world.

“The danger is that when institutions and labour markets fail to respond to the needs of young people, marginalized youth can gravitate towards violence as a means to an end,” he said.

The report, which is based on surveys conducted in more than 3,000 households in south central Somalia, Puntland and Somaliland, stresses that radical shifts in policies and attitudes are needed to empower and place them at the core of the development agenda.

It also recommends putting the empowerment of youth and women at the centre of Somalia’s national development agenda, and calls for a broadening of the current clan-based electoral system to include marginalized groups.

Somalia has been undergoing a peace and national reconciliation process, with a series of landmark steps over recent weeks helping bring an end to the country’s eight-year political transition period. These steps included the adoption of a provisional constitution, the establishment of a new parliament and the selection of a new president.

In a news release, UNDP added it is working with the new Government, civil society and international partners to provide vocational training to youth at risk, equip young Somalis with scholarships and employment opportunities, and train young Somali women and men as police recruits to help create a better future for Somali youth.

“Harnessing the full potential of Somalia’s youth is the key to new dynamism and hope,” said Ms. Bahous. “Opportunities could come through providing quality education and decent jobs – channelling the demographic dividend into economic gains and social transformation.”

The launch of the report, which is the first of its kind in the country in more than a decade, follows the Somalia mini-summit which took place this week during the 67th session of the UN General Assembly. 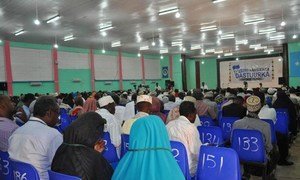 Secretary-General Ban Ki-moon today praised Somalia for the progress in its democratic transition and called on the international community to continue supporting the East African nation, stressing that “there is no time to lose” as the country is still facing serious humanitarian and security challenges.