“The prospect of terrorists acquiring nuclear materials is one of the most unnerving threats imaginable. Yet some have already stated their hopes of obtaining nuclear weapons. Still others may be working in the shadows to achieve this goal,” Secretary-General Ban Ki-moon told the high-level meeting on countering nuclear terrorism, held on the margins of the 67th session of the General Assembly.

“We must use all our tools to contain this nuclear genie. As we confront other challenges relating to nuclear disarmament, we cannot allow these arms to proliferate to non-State actors or terrorists.”

Mr. Ban noted that countries have already taken steps to address this threat, namely through the International Convention for the Suppression of Acts of Nuclear Terrorism and Security Council resolution 1540.

The Convention, which has been ratified by 82 States, enhances international cooperation to prevent nuclear terrorism and to prosecute and punish perpetrators of such acts. Resolution 1540 imposes binding obligations on all States to establish controls preventing the proliferation of nuclear, chemical and biological weapons, and their means of delivery.

Mr. Ban urged all countries that have not done so to become party to the Convention and fully comply with resolution 1540, and emphasized that nations must build on these foundations by adhering to international instruments and a rigorous review mechanism, as well as by increasing their capacity to prevent the proliferation of weapons of mass destruction and related materials.

The Director General of the UN International Atomic Energy Agency (IAEA), Yukiya Amano, underlined that international cooperation is vital, and reiterated the IAEA’s readiness to help countries improve nuclear safety and its role in coordinating international efforts on nuclear security.

“Terrorists will exploit the weakest link in any security system. The challenge is global, so the response must be global. Continued shortcomings in nuclear security need to be addressed urgently,” Mr. Amano said.

While there are mechanisms in place to make it more difficult for criminals to traffic nuclear and radioactive material, there are still key risks such as the possibility of terrorist detonating a dirty bomb using conventional explosive and a quantity of nuclear material, which would have serious consequences, Mr. Amano said.

“This would not be a fully-fledged ‘nuclear bomb’, but such an attack could lead to mass panic and cause considerable economic disruption. We must therefore maintain the utmost vigilance in protecting nuclear and other radioactive material and nuclear facilities.”

“The IAEA is committed to intensifying cooperation with all of you in this room to help make the world safer from nuclear terrorism,” he said. 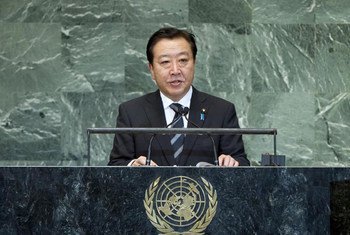 26 September 2012
Recalling that a year and a half had gone by since the earthquake which struck his country last March, Prime Minister Yoshihiko Noda of Japan today told the United Nations General Assembly that his Government was determined to pass on lessons learned from the resulting disaster and make concrete contributions to nuclear safety.