28 September 2012
The United Nations Human Rights Council today voted to extend the mandate of the independent panel probing abuses in Syria, and called on all parties to put an end to all forms of violence.

The Independent International Commission of Inquiry on Syria, established in September 2011 by the Geneva-based Council, reported earlier this month that the scale and frequency of gross human rights violations in Syria has significantly increased in recent weeks, with indiscriminate attacks against civilians occurring on a daily basis in many areas of the country.

Today’s resolution was adopted by the 47-member Council by a vote of 41 in favour to three against (China, Cuba and Russia), with three abstentions (Philippines, India and Uganda).

The Council strongly condemned the “continued widespread and systematic gross violations of human rights and fundamental freedoms” by the Syrian authorities and the Government-controlled militia known as the Shabiha.

It also strongly condemned the “increasing number of massacres” taking place in Syria, and requested the Commission to investigate all massacres.

Strongly condemning the massacre that took place earlier this year in the village of Al-Houla near Homs, where the forces of the Syrian Government and members of the Shabiha were found by the Commission to be perpetrators of “outrageous and heinous” crimes, the Council stressed the need to hold those responsible to account.

In the report presented earlier this month, the Commission said it had found reasonable grounds to believe that Government forces and members of the Shabiha had committed war crimes, gross violations against human rights and crimes against humanity.

A confidential list of individuals and units that are believed to be responsible for violations will be provided to the UN High Commissioner for Human Rights, Navi Pillay, the panel said.

Also today, the President of the Human Rights Council, Laura Dupuy Lasserre, announced her decision to appoint Carla del Ponte, the former Prosecutor of the International Criminal Tribunals for the former Yugoslavia and Rwanda, and Vitit Muntarbhorn, who has served the Council previously as a Special Rapporteur, as additional members of the Commission.

In a related development, the head of the UN Educational, Scientific and Cultural Organization (UNESCO) today condemned the killing of two Syrian journalists and called for an investigation into the deaths.

Maya Nasser, a correspondent for Iran’s English-language Press TV, was shot by a sniper on 26 September while reporting on a twin bomb attack on the military command headquarters in central Damascus. He died shortly afterwards in hospital, according to a news release issued by UNESCO.

Abdelkarim Al-Oqda, a citizen journalist for Sham News Network (SNN), was reportedly killed during an assault by Government forces on Arbaeen, a neighbourhood in Hama, on 19 September. According to the non-governmental group Reporters Without Borders (RSF), he died when security forces attacked his home and set it on fire.

“Once again, I call on all those involved in the conflict in Syria to respect the civilian status of journalists, including citizen journalists, to exercise and their right to freedom of expression,” said UNESCO Director-General Irina Bokova.

Al least 30 journalists and citizen journalists have been killed in Syria since the start of the uprising, UNESCO pointed out. 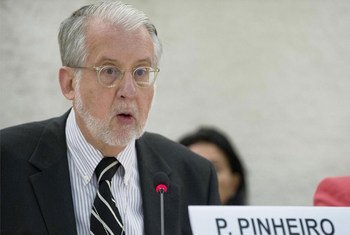 17 September 2012
The scale and frequency of gross human rights violations in Syria has significantly increased in recent weeks, according to a new report by the United Nations independent panel probing abuses committed during the country’s ongoing conflict.