Taking the podium at the United Nations General Assembly today, China’s Foreign Minister Yang Jiechi stressed the need to ensure that international relations are based strictly on the principle of non-interference in each other’s affairs.

“Mutual respect and equality are basic norms governing international relations. All countries, big or small, strong or weak, rich or poor, are equal members of the international community,” Mr. Yang said at the 67th Assembly’s General Debate at UN Headquarters in New York. “Respect for each other's sovereignty, core interests and choice of social system and development path is a fundamental principle guiding state-to-state relations.”

On the issue of the disputed ownership of a small group of islands located in the East China Sea – known as the Diaoyu Dao in Chinese and the Senkaku in Japanese – Mr. Yang said Japan’s recent private purchase of the islands “grossly violated” China’s sovereignty and described the act as posing “a grave challenge to the post-war international order and the purposes and principles of the Charter of the United Nations.”

“The moves taken by Japan are totally illegal and invalid,” he said. “They can in no way change the historical fact that Japan stole Diaoyu Dao and its affiliated islands from China and the fact that China has territorial sovereignty over them.”

The Foreign Minister said China supports the United Nations in enhancing its authority and efficiency and the ability to address new threats and challenges through proper reform.

“It is important to advance the building of a global system of economic governance with a focus on reforming the international financial system, speedily implement the quota and governance reform plans of the IMF (International Monetary Fund) and other financial institutions and increase the representation and voice of emerging markets and developing countries,” he said.

In his speech, Mr. Yang called for respect for the diversity of the world and the right of all countries to independently choose their development paths. “We must oppose terrorism, separatism and extremism in all forms,” he said.

Turning to international crisis points he called on all relevant parties in Syria, where over 18,000 people have been killed since an anti-government uprising erupted 18 months ago, to launch an inclusive political dialogue and a Syrian-led political transition as soon as possible. “China is open towards any political plan that is acceptable to all parties in Syria,” he said.

On Iran’s nuclear programme, which Tehran says is for the peaceful purpose of producing energy but which the United States, Israel and other countries say could be aimed at producing a nuclear weapon, Mr. Yang said the issue had “reached a new crucial stage.

‘The relevant parties should remain committed to a diplomatic solution and begin a new round of dialogue as soon as possible,” he added. “We should, acting in the spirit of respecting each other's concerns, showing flexibility and pragmatism, expanding common ground and overcoming differences.”

The Chinese Foreign Minister is one of scores of world leaders and other high-level officials presenting their views and comments on issues of individual national and international relevance at the Assembly’s General Debate, which ends on 1 October. 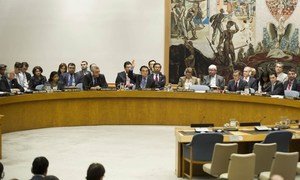