27 September 2012
South Sudan has had to deal with several serious challenges since it became an independent nation last year, its Vice President, Riek Machar, told the General Assembly today, adding that he is confident it can succeed with the continued help of the international community.

“Our nascent nation has been tested enormously in its first year of independence,” Vice President Machar said in his address to the 67th Assembly’s General Debate, which began on Tuesday at UN Headquarters in New York.

South Sudan became the world’s newest country on 9 July 2011. Its birth was the culmination of a six-year peace process which helped bring an end to the long-running conflict between South Sudan and Sudan, which it was formerly a part of.

However, the peace between the two countries has been threatened in recent months by armed clashes along their common border and outstanding post-independence issues that have yet to be resolved.

He added, “The Government is taking serious corrective measures and institutional capacity building to address this issue in order to restore public confidence.”

Regarding security, Vice President Machar said the country is currently facing security threats in the form of armed militia groups creating insecurity and undermining the young democracy. The Government has accorded the highest priority in reaching peaceful resolution to these internal conflicts, and four of the armed militia groups have laid down their arms and integrated voluntarily into the country’s national army and civilian life.

“We believe that internal and external security of our nation is a prerequisite in having meaningful economic development and social progress,” said the Vice President.

“While we are working tirelessly towards achieving and maintaining peace within our borders, critical unresolved issues remain between South Sudan and Sudan, including border demarcation, citizenship rights, the status of Abyei, and oil-related issues,’ he stated. “The lack of progress in these post-independence issues has been posing threats to peace and stable relations between the two countries.”

Vice President Machar’s address comes on the same day that Presidents Omar Al-Bashir of Sudan and Salva Kiir of South Sudan signed agreements on security, the common border and economic relations during their talks in the Ethiopian capital, Addis Ababa.

“We are hopeful that the new agreement[s] with the Sudan will lead to the resolution of our differences on security, borders and the use of petroleum infrastructure. It is envisaged that if each side upholds its part of this agreement, the most significant causes of dispute between our two countries will have been amicably resolved,” the Vice President said.

He added that South Sudan cannot achieve its goals alone: “We need continued support from friends, partners and the international community. We are confident that together we shall overcome the challenges ahead.”

Vice President Machar is one of scores of world leaders and other high-level officials presenting their views and comments on issues of individual national and international relevance at the Assembly’s General Debate, which ends on 1 October.

At UN, leaders of small nations voice concerns over climate change and development

At General Assembly, Somali premier thanks UN for its support throughout years of strife 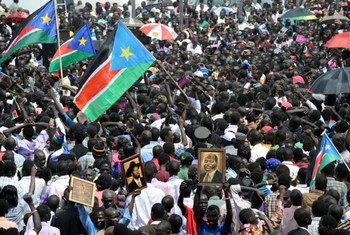 9 July 2012
Secretary-General Ban Ki-moon today extended his best wishes and congratulated the people of South Sudan on the first anniversary of their country’s independence.