“Our very existence depends on it,” President Mori said in his address to the 67th Assembly’s General Debate, taking place at UN Headquarters in New York. “Without international cooperation and assistance, we are helpless against the adverse impacts of climate change.”

President Mori called for closure of what he termed the “ambition gap.” In reference to the Kyoto Protocol’s rolling emission-reduction commitment periods, the first of which will expire at the end of 2012, ¬ he called on major emitters to “step up their level of commitment under the second commitment period.”

“How do I tell my people that their plight and their future lie in the hands of those most responsible for greenhouse gasses?” he asked.

The President said his country was pleased with the agreements – reached at the UN Conference on Sustainable Development (Rio+20), held in Brazil in June – for cooperation to begin on globally reducing the production and consumption of hydrofluorocarbons, noting that Micronesia had in 2009 proposed such an amendment to the Montreal Protocol on ozone depletion substances.

But he urged leaders to recognize that Micronesia, despite appearing to occupy a “pretty empty” part of the world, is to its inhabitants “as much a homeland as any continental landmass.”

“We must defend it just as strongly,” President Mori said. To that end, he outlined additional problems that threaten the “ocean environment” on which islanders depend for their livelihoods. In addition to rising tides and temperatures, and ocean acidification, he cited destructive fishing practices and pollutants such as mercury, oil and waste from “unsustainable” human activity.

“Urgent actions to reduce by-catch, fish discards and post-harvest losses must be taken,” he said.

He added that his country welcomed the decision in Rio to hold a global conference on Small Island Developing States (SIDS) in 2012, and called for it to be located in one of the Pacific SIDS countries.

Beyond Micronesia, other topics touched upon in the Micronesian leader’s speech included reform of the Security Council and the crisis in Syria.

The President is one of scores of world leaders and other high-level officials presenting their views and comments on issues of individual national and international relevance at the Assembly’s General Debate, which ends on 1 October. 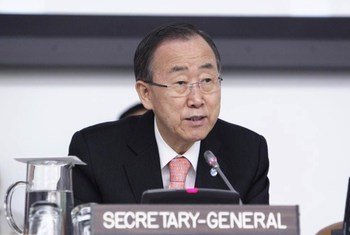