27 September 2012
In the United Nations General Assembly today, the leader of Bosnia and Herzegovina upbraided the international community over its failure to act in the Syrian crisis, saying it had failed to learn the lessons from the massacres that tore his own country apart 17 years ago to prevent a repetition of those events in the Arab state.

“The images coming from Syria remind us of the tragedy of Bosnia,” the Chairman of the Presidency of the Balkan nation, Bakir Izetbegovic, told the 67th Assembly on the third day of its annual General Debate, at UN Headquarters in New York.

“We in Bosnia and Herzegovina feel the pain of the Syrian people as our own because we went through the same horrors not that long ago,” he said, citing the massacre of 8,000 Muslim men and boys by Bosnian Serb forces who overran the UN-designated safe haven of Srebrenica, the largest such massacre on European soil since the founding of the world body.

“The best way to honour the victims of the Srebrenica genocide would have been to learn the lessons of that failure and not to commit the same errors ever again,” Chairman Izetbegovic added. “Sadly, the United Nations, especially its Security Council, have failed to do so.”

Over 18,000 Syrians have been killed and hundreds of thousands of others driven from their homes since the uprising against the regime of President Bashar al-Assad erupted 18 months ago, and Chairman Izetbegovic denounced his regime for answering his people’s yearning for freedom and democracy with guns and bombs.

“This is revolting and morally reprehensible, but so is our collective failure to stop it,” he said. “Once again, we are idly standing by while a human tragedy of dramatic proportions is unfolding before our eyes. We should do our part to help the Syrian people's historic stand for freedom.

We should do our part to save the people of Syria from tyranny. We should. But we are not.”

Chairman Izetbegovic stated that the international community has chosen, yet again, to repeat the trial-and-error pattern of policies that failed in Bosnia and Herzegovina, resorting to resolutions, statements of concern, ineffective sanctions, observers, and no mandate to protect civilians, all actions that have deadly consequences as demonstrated in his own country.

“Make no mistake,” he declared. “Unless we act now and act decisively to help the people of Syria and put an end to their bloodshed, this tragedy will haunt our history forever, just like Srebrenica.”

In his statement, the Chairman hailed the “historic awakening” of the Arab Spring which has seen long entrenched leaders ousted in Egypt, Egypt, Tunisia and Yemen, saying the drive to create democratic societies is the best confirmation that Muslims strongly strive for freedom, dignity, and human rights.

He deplored the lack of progress in the Middle East peace process, calling Israeli settlement activities on occupied Palestinian territories the most serious obstacle to peace based on a two-state solution with the two, living side by side within secure and recognized borders.

“The Palestinians have every right - historic, moral, and legal – to a state of their own. Israel has every right to its security,” he stressed. “The occupation must end. But so must the terror and violence.”

Turning to the recent publication of a anti-Islam video produced in the United States which sparked deadly violence in Arab and Islamic countries, Chairman Izetbegovic called the video deeply insulting and deserving the strongest condemnation.

“There is, however, no justification for responding to this movie with violence. Violence in response to speech is unacceptable. There can be no debate about that. Violence is no way to honour religion,” he said. “We must draw the line at violence. But we also must find a way to prevent hate speech and bigotry. Yes, there is the right to free speech. But there is also the right to dignity.”

Noting that the relation between the West and the Islamic world, and between their respective value systems, is going to be one of the most critical issues in the time ahead, he emphasized that there is no inherent contradiction between Islamic and Western values.

“There are only those who need to create a false perception of clash in order to come to power or maintain their hold on power,” he added. “In this modern age, we have to keep searching for a formula, a model for how to reconcile the relations between Islamic and Western values, between the East and West. No matter how hard it may be, finding that formula is going to be essential in the time ahead of us.”

The Chairman of the Presidency of Bosnia and Herzegovina is one of scores of world leaders and other high-level officials presenting their views and comments on issues of individual national and international relevance at the Assembly’s General Debate, which ends on 1 October. 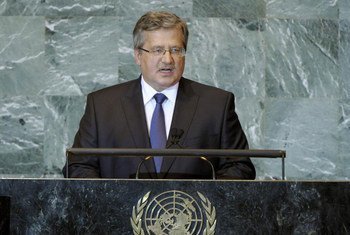