The President of Kiribati, a mainly low-lying Pacific archipelago that is one of the states most threatened by rising seas, today appealed to the United Nations to step up efforts to curb global greenhouse emissions and help in mitigation measures, including possible migration.

“We are grateful that the General Assembly agrees that climate change is a matter warranting the attention of the Security Council,” Kiribati’s President Anote Tong told the UN General Assembly on the second day of its annual General Debate, at UN Headquarters in New York.

“I applaud the commitment of our Secretary-General to this particular security threat, but he needs the support of all nations to take the necessary action to address it. We must step up our collective efforts to mitigate global greenhouse gas emissions,” he said.

The Kiribati leader called on development partners to provide resources and technology to enable his country to deal with the current impacts of climate change and prepare for an uncertain future.

“While we are taking adaptation measures to ensure that Kiribati remains habitable for as long as possible, we are also preparing for a future where our islands may no longer be able top sustain our population,” President Tong stated in his speech.

“We are looking to improve the skills of our people to a level where they are able to compete for jobs in the international labour market. We want our people to have the option to migrate with dignity should the time come that migration is unavoidable. And all the science is telling us that it is just a matter of time,” he said.

He added, “I frequently find myself watching my grandchildren and wondering what sort of a future we are leaving them.”

President Tong is one of scores of world leaders and other high-level officials presenting their views and comments on issues of individual national and international relevance at the Assembly’s General Debate, which ends on 1 October. 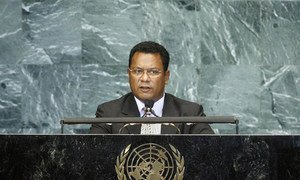 The leaders of three Pacific Island countries called on the United Nations today to take a series of measures to help them and other small island nations combat the effects of climate change.