26 September 2012
Haiti’s President Michel Martelly called on the United Nations today to ensure that the flame of hope for a better world ignited by the world body’s foundation 67 years ago continues to burn brightly by ensuring the equality of all states, both large and small.

“We have learned from history that there was no justice or equality in international relations when each nation sought its own interests,” he told the 67th General Assembly on the second day of its annual General Debate. “The creation of the United Nations lit the hope among the peoples that things could be different. We must not let that flame die.”

“In any family in general, and in that of the United Nations in particular, there cannot be big powers and small, giants and dwarfs, but only equal beings who have interests to defend, opinions to advance on the basis of relations turned towards the future, relations bearing the stamp of freedom, equality, fraternity and the pursuit of happiness for all,” he added.

President Martelly said his country, one of the world’s poorest, which over the past has suffered from political instability, a devastating earthquake, hurricanes and cholera, is making progress as it seeks to emerge from the morass of problems besetting it.

“I can truly claim that the impulse has been launched and I do not doubt that we will be able to see the results in a few months or a few years time,” he stated.

“But will these national dreams come to pass if the pledges made to help the development of countries like ours are not effectively realized, if all kinds of prejudices and suspicions are maintained towards those who are less endowed?” he asked.

The Haitian leader is one of scores of national leaders and other high-level officials who are presenting their views and comments on issues of individual national and international relevance at the Assembly’s General Debate, which ends on 1 October.

President Martelly also met with Secretary-General Ban Ki-moon on Wednesday. The two men discussed the current situation in Haiti, including political developments and its cholera epidemic, and the UN chief commended the President for his leadership in advancing reconstruction and stabilization efforts.

Mr. Ban called on the President to continue working closely with his Special Representative in Haiti on the further consolidation of the peacekeeping operation based there, the UN Stabilization Mission in Haiti (MINUSTAH). The pair noted that this process should go hand-in-hand with the strengthening of the Haitian National Police.

They also discussed the need to finalise the establishment of a permanent electoral council so that Haiti’s long-overdue local and legislative elections are held in a credible and transparent manner. 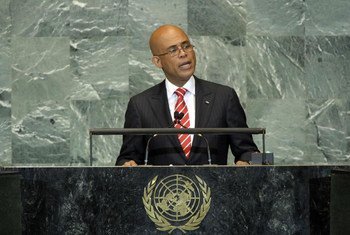 23 September 2011
Haitian President Michel Martelly said today he does not want the United Nations peacekeeping mission to leave but to stay on to assist the impoverished country as his Government seeks to tackle the problems of education, jobs, the environment and the rule of law.