Recalling that a year and a half had gone by since the earthquake which struck his country last March, Prime Minister Yoshihiko Noda of Japan today told the United Nations General Assembly that his Government was determined to pass on lessons learned from the resulting disaster and make concrete contributions to nuclear safety.

Speaking at the 67th Assembly’s General Debate, at UN Headquarters in New York, he enjoined the community of nations to “imagine the benefits of future generations” and to act on their behalf, adding that the accident at the Fukushima Daiichi Nuclear Power Station last year – a result of the “Great East Japan Earthquake” – had led the Government to take steps to create a society not dependent on nuclear power by the 2030s.

To this end, the Prime Minister said, the Government is co-sponsoring, with the International Atomic Energy Agency (IAEA), the Fukushima Ministerial Conference on Nuclear Safety at the end of 2012 and in three years, the 3rd UN World Conference on Disaster Reduction.

Japan’s Fukushima Daiichi nuclear power plant that was severely damaged during the earthquake, when the building housing the plant exploded and three of its nuclear reactors suffered a meltdown in what was reported to be the worst nuclear accident since the 1986 Chernobyl disaster. A 19-kilometre exclusion zone still surrounds the disaster site.

Pointing out that the world is going through a period of complicated and violent change, the Japanese leader went on to say that the concept of the rule of law is the foundation for a stable and reliable society, adding that violation of this principle “must not be tolerated for any reason.” Japan is leading the world in its personnel and financial contribution to international judicial institutions, he added.

In his remarks, the Prime Minister also called on his counterparts to do more to combat threats such as environmental degradation, terrorism and the proliferation of nuclear weapons, and to build a sustainable future for the sake of succeeding generations. “Political leaders must take charge of their responsibilities now for tomorrow,” he said.

Making the case for fiscal responsibility, Prime Minister Noda warned that deficits must be trimmed now by cutting spending and striving to increase revenues. Over the past 20-odd years, Japan repeatedly procrastinated in politics and was considered a symbol of a “country that delayed decisions,” he noted.

He resolved that Japan would undertake “comprehensive reform of social security and taxation systems” in the face of an aging population.

Prime Minister Noda also met with Secretary-General Ban Ki-moon on Wednesday. In their meeting, the UN chief expressed his deep appreciation for Japan’s contribution to peacekeeping and sustainable growth in Africa, and commended the Asian nation’s experience in disaster risk reduction, which he said the international community could benefit from.

The Prime Minister was one of scores of national leaders and other high-level officials who are presenting their views and comments on issues of individual national and international relevance at the Assembly’s General Debate, which ends on 1 October. 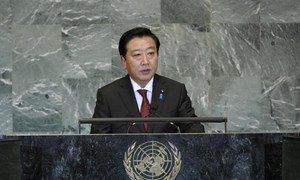 Stricken nuclear plant to be fully shut down by end of year, Japan tells UN

Japan is making steady progress in stabilizing the nuclear power plant damaged by the massive earthquake and catastrophic tsunami which hit the country in March, but a number of challenges remain, including the removal of debris and restoring the livelihoods of people in the affected region, Prime Minister Yoshihiko Noda told the General Assembly today.